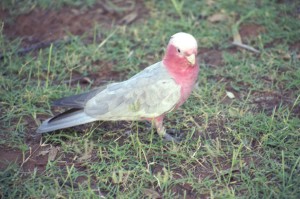 Not long after Joe the sulphur-crested Cockatoo (see one of my early blogs) joined our family in the 1940’s my Father Eric came home one evening with a cage containing an injured Galah parrot. To us children this multi-coloured bird was a thing of beauty and by common consent it was agreed we should call our new pet “Pretty.”

Pretty was a young bird and was not at all concerned at being caged. None of us knew the circumstances under which this bird was injured. A travelling salesman had picked it up on the roadway on his dusty trip from the capital city Brisbane to Eric’s motor supplies shop in Gympie, and not knowing what to do with the bird he’d offered it for adoption. The salesman, whose motivation in rescuing the bird was pure, had bite marks all over his hands as a reward for his concern and was anxious to get this ungrateful bird out of his life, but conscience would not permit him to leave it by the roadside to fend for itself.

Having closely observed the wounds on the salesman’s hands Eric rushed to buy a cage, into which the salesman thankfully deposited the bird. The galah rocked back and forth on her wooden perch and surveyed Eric with black beady eyes. A quick trip to a pet shop produced seeds and cuttlefish which Pretty began to destroy immediately. Birds love the calcified remains of this sea creature found in abundance on Australian beaches! Our twice a year trip to the seaside on holidays would henceforth include a daily hunt for cuttlefish on the beaches.

Pretty settled into her new surroundings quickly. For a while we experimented with trying to entice her out of the cage knowing she’d not be able to fly away, but the bird preferred to climb back into her cage which was obviously her sanctuary from whatever calamity had befallen her in younger days. Later we trimmed wing feathers before attempting to give her time out of the cage. The experience with Joe making it up to the top of a tree and almost starving not having the courage to fly down made us more cautious with Pretty.

Out in the wilds birds groom each other, but when immobilized and away from other birds the formation of calcium deposits irritates, and both Pretty and Joe would almost beg for us to scratch in among feathers they couldn’t reach on neck and head. They’d give most accusing looks when we children tired of the game and looked for other entertainment. They’d rock on their perches and screech in anger as we departed.

Now and then Pretty would give a sound bite on a finger to let us know the grooming session had ended and as blood spurted from fingers we’d understand how it was parrots could crack nuts as expertly as we could hammer out nut kernels.

Ian was the experimenter in the family. He discovered when you stretch cloth tight a parrot’s beak cannot grip and slides on the fabric rather than penetrates skin. So to demonstrate this new found and valuable scientific discovery he performed for the neighbourhood children sitting on Pretty’s cage while the bird tried diligently to inflict punishment for that insult. But to no avail! The more Pretty’s beak slid on that taut fabric covering Ian’s posterior the more Pretty would shriek in frustration. However in the last of those scientific demonstrations Ian got the giggles, the fabric loosened and as a result Pretty found her target with immense satisfaction. This time blood flowed, but not from fingers. The experiment was discontinued.

But all was forgotten next day when Pretty rocked over to the side of the cage, turned her head ninety degrees and presented herself for her daily grooming. Ian gingerly extended a finger ready to withdraw at great speed if necessary, but peace reigned in Pretty’s world and there was no more cause for concern.