It was December 2004 and we were enjoying a warm balmy summer evening on the sub-tropical Sunshine Coast, Australia when the telephone chimed. Georgine grabbed the phone expectantly. “Probably one of the girls or a family member,” she said absently.

“Thailand calling!” sang the charming voice of a long distance telephone operator. We were connected then to a strong male voice at the other end of the line. “This is Gil speaking and I’m phoning from Bangkok. We were wondering if you’d be prepared to spend a few months with us at the University while we head hunt a Financial Administration VP?” There was a long pause as Gil waited for the message to sink in, and then he added, “As volunteers?”

It had been several years since I’d made the two hour trip north to Muak Lek and viewed the property on which it was proposed to build a Thai Language College and Health Centre. Since that time plans had been put in place to upgrade the Thai Language College to an international multi lingual University and it was now complete. Millions of dollars had been spent and I’d seen recent pictures of the campus. It was definitely up-market, large and gorgeous. Georgine and I had a quick conference. “OK we’ll come, when do you need us to be there?”

“Yesterday!” Gill laughed. “Come as soon as you can.”

So by early January 2005 we were beginning our journey to Brisbane airport for the several hour flight to Bangkok. It was midnight when we arrived, and after completing formalities and grabbing our luggage we were happy to see two eager faces waiting at the arrival area, and were soon on our way north to the campus at Muak Lek. We marveled at the tremendous road and city developments we saw on the way. A few years away from a place makes quite a difference to the landscape and it was obvious Thailand was now a prosperous country proudly nudging a place toward the developed countries of the world.

Even in the middle of the night on arrival the campus far exceeded our expectations. We were settled in a faculty home, grabbed a few hours sleep and were at the office early next morning to take up our duties much to the amazement of administration and staff. We felt very welcome, and to our amazement University Cafeteria food was great. It seems to be a tradition that institutional food is unpalatable, but this was a notable exception. 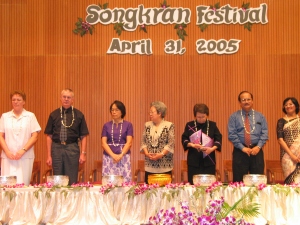 We enjoyed feeling useful again. Retirement is great but once in a while one hankers for the excitement of being part of a working team. Toward the end of our assignment we were pleasantly surprised when the University President sent word she was arranging for us to take time off to visit Kanchanaburi and some of the notable tourist places within easy reach of the University. Dr Sue would be taking us by road and we’d be spending a few days at our destination.

“Kanchanaburi, what on earth is that?” In all my travels I’d never come across that name before, however when Dr. Sue said, “You may have heard of the Bridge over the River Kwai?” we certainly knew where we were going and our excitement knew no bounds. How many times have we seen that movie produced in 1957?

Well the expected day arrived and we were on our way to Kanchanaburi. That city contains the impressive well kept monument parks of non-Asian expatriate dead. Two hundred thousand Asians were “recruited” in addition to the POW’s. Only thirty thousand could be traced at the conclusion of the war. The Japanese army bulldozed thousands of Asian dead into common grave trenches in addition to well kept monument parks and these Asian enslaved laborers are unsung martyrs who haven’t received adequate recognition for their sacrifice.

Actually the Bridge over the River Kwai is not in Kanchanaburi. There’s a steel bridge dismantled and taken from occupied Indonesia and rebuilt in that city. Tourists walk that bridge as the only remaining relic of the times and a hint of the infamous bridge further toward Burma and no longer existing at what is now known as “Hellfire Pass” where the Australian Government has built a monument and information centre. We relived the horrors of that era at that site as we watched movies and read stories on the museum exhibits.

We purchased a book called “The True Story of the Death Railway and The Bridge on the River Kwai.” Unfortunately no author or Publishing House is given in that book. Quite unusual! You may be interested in a synopsis of its contents.

In June 1942, 61,000 British, Australian, American, New Zealand, Danish and Dutch POW’s as well as an estimated 200,000 laborers from India, China, Indonesia, Malaysia, Singapore, Burma (now Myanmar) and Thailand were put to work by the Japanese Imperial Army to construct a railway line 415 km long to link Kanchanaburi to the Japanese Base Camp in Thanbyuzayat in Burma, thus ensuring a direct line from Singapore through Malaya and Thailand to link up with the railway network in Burma. Apart from supplying their bases in Burma the Japanese had also planned to use the railway to launch an attack on India.

The decision to build the railway was made by the Japanese Cabinet following the decisive defeat of its navy at Battle of Midway in June 1942. At that time a large Japanese army was based in Burma and another in New Guinea and adjacent islands. Both depended for support and supplies on the navy which after Midway no longer enjoyed its former supremacy. The Japanese were aware that the British had surveyed a proposed railway linking Burma and Thailand in 1910 and they had abandoned the project in 1912 because of difficult terrain, endemic diseases and high monsoonal rainfall. To planners studying the map in Tokyo however, the construction of a 414 km railway seemed an obvious solution to supplying the army in Burma and thus void the hazardous sea route around Singapore and through the Straits of Malacca.

Accordingly two Japanese railway regiments totaling 12,000 men were assigned to the railway project to be based at Thanbyuzayat in Burma and Kanchanaburi in Thailand. Deadline for completion was August 1943 and in June 1942 the Japanese began moving prisoners of war to Burma and Thailand. Construction of the railway began on September 16 1942. First estimates by engineers suggested it would take at least five years to build, but under tremendous pressure POW’s were forced to complete the road in 16 months. On December 25 1943 the “Railway of Death” was completed. The total workforce employed included 61,000 British, Dutch, American and Australian POW’s and over 200,000 conscripted Asian laborers.

The effect was devastating. 16,000 allied prisoners of war lost their lives when this railway was built together with more than 100,000 slave Asian laborers whose passing received scarcely a mention. The occupying force reasoned there were lots of Indians and Chinese and so they’d be expendable. The “Railway of Death” left such a gruesome number of bodies in its track, in stark contrast to the number of wooden sleepers placed on the ground to support the tracks. Every kilometer of railway track cost the lives of 38 allied soldiers and many more of their Asian fellow slave laborers. 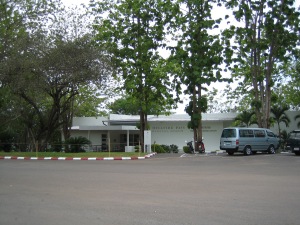 The “Railway of Death” was built as a strategic railway between Thailand and Burma, 263 km in Thailand and 152 km in Burma. After the war Thai and Burmese governments mutually agreed to destroy tracks from their common border to one hundred kilometers inland.

There were many more sights we were privileged to see on that tour with Dr Sue, and we were grateful to the University President for her generous gift. However the Kanchanaburi trip, along with sights we’d seen in various museums and memorial parks were a sobering reminder of the folly of war and its tremendous cost in human life and national degradation.

Planning a trip to Thailand? By all means enjoy their world class resort areas on the coast, but make sure you schedule in your itinerary a trip to the tribal areas to the north, to the war memorials at Kanchanaburi, the Summer Palace, and their spectacular gigantic Handicraft Centre. Finish it off with a shopping trip to Bangkok where you’ll enjoy fabulous bargains, and don’t miss out on the evening river dinner cruise.