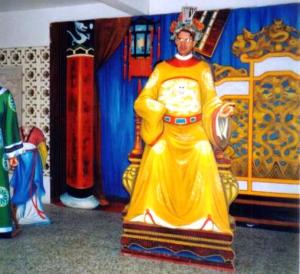 I hadn’t been in Singapore long in 1985 before I realized how important it is to know what’s going on in other people’s heads when it comes to comfort in travel. Travel to northern countries like Japan and Korea is a trip to be coveted, and I noticed there was no lack of volunteers to handle business in these northern countries as we sat together in committee to apportion travel responsibilities for the rest of the year.

Well it appeared to be that way as I looked over the schedule and found my fellow administrators names already filled in. But there was a noticeable gap to be filled for the months November through January to that northern area. The old guard who’d been working in Singapore for many years looked at me, and in almost one chorus asked.

“Could you handle assignments in the north during November and January Ian?”

Well, what could you say to those imploring faces but, “Yes, I’ll be glad to take those itineraries!” Obviously I’d be doing everyone a favour so I patted myself on the back for being so accommodating and basked in their smiles of approval.

Then after a month settling into my new job I was ready to commence travelling and begin my mad dash around western and eastern areas of the Asia-Pacific familiarizing myself with development needs. Sri Lanka, Myanmar and Bangladesh were familiar countries as I’d serviced those areas from my previous office location in India. It was nice to get reacquainted with people I knew there. I wasn’t yet ready to brave the rigors of travel in Communist Indo-China so jumped across to Malaysia, Indonesia and the Philippines to establish new contacts and familiarize myself with needs there. That initial trip having been successfully completed I returned to Singapore to process my findings and enjoy a little quality time with family.

It had not taken my family long to adjust to the comforts of Singapore and happiness reigned supreme on the home front. My spouse had only one complaint. Apparently road travel in Singapore was too tame and organized for her. She was used to the thrill of road travel in India where horn and gas pedal are the only two important items to be desired in a car, and rules are made up as one travels the highways at breakneck speed. She’d just have to adjust to the predictability and strict rules of traffic in our new home city state, and she did.

Then approaching the month of October some of the old guard in conversation casually asked if I’d acquired a long warm coat and other warm clothes for my itineraries in the north November through January. It was then I realized the reason there’d been blank spaces on my fellow administrators travel plans during those months. I was the new kid on the block. I was an easy target for their machinations.

So in late November I found myself at the Singapore airport sweating in high humidity under the weight of luggage, which included sufficient warmth to keep me alive in temperatures I hadn’t experienced before. Seoul Korea was my first destination, and Tokyo Japan the next.

I was to be met at the airport, but as Seoul is a gigantic sprawling city there are many reasons why people may not make it to the airport on time in spite of Korea’s excellent road system. This was one of those times, and I shivered in the arrivals area waiting, in spite of air conditioning set at what seems to be near zero by the hardy Koreans.

On this occasion my Korean contacts took pity on me and lodged me in the Mammoth Hotel where air conditioning had been ratcheted up to a point where foreign tourists could survive. On later visits I was expected to have adjusted my expectations and lodged in what seemed to be refrigerated guest rooms. Koreans thrive in this climate and cannot understand why the average westerner makes such a fuss about cold weather.

At 6 am on a winter morning Seoul children are merrily making their way to school, and you will find university students at 9 pm returning from school and studying their textbooks in the dim light of a bus as it takes them on their long journey home. No wonder the people of the north excel with that resolve and dedication to the job at hand!

As I rode an air conditioned bus from Seoul to Pusan the beauty of the countryside with its unique village architecture kept me enthralled while I sat in my overcoat. Koreans, some in short sleeves eyed me curiously. I was captivated by the large plastic sheeted igloos dotting the snow and ice covered landscape, and found that these were actually hothouses in which vegetables were grown throughout winter months. My well educated nose told me what brand of fertilizer was being used in our stopovers along the way.

Each tour bus is equipped with video screens and kung fu movies are the movie of choice. It was on that trip I experienced my first pot bellied warmer stove in homes, beds consisting of mattresses on a heated cement floor which I consider to be a most efficient room heater, and the ever available wheat tea. I was not tempted to try a can of “sweat” though some of the young teachers in English Language Schools in Seoul told me it was really quite delicious.

At first my Korean hosts tried to please me with their version of western food at each place I visited. Never be tempted to try that in Korea! I tried the local foods and found them to be excellent cuisine. It took patience to learn how to use the unique small stainless steel chopsticks with the flat ends for grasping food. The long variety of chopsticks is easy to use, but these small stainless steel ones are a real challenge. Korean food is something I can thoroughly recommend.

Well as I said the next stopover was Tokyo, and this time my contacts booked me into the Hilton Hotel. My first appointment was in Yokohama, but I’d arrived in the midst of adverse weather conditions, and for the next few days gazed out of my window on one of the largest cities of the world covered in banks of snow. No traffic was moving as far as I could see from my window, and only occasionally did I see a person high stepping through the snow. I was settling in for a days reading in my room when there was a loud knock on my door. There to greet me were my Yokohama contacts. “Are you ready to go?”

So I hastily put on all the warm clothing I had available, well worn now after my trip to Korea, and headed miserably out onto the streets. It was there in Tokyo I mastered the high snow walk as we slogged our way to the nearest subway station for the journey to Yokohama. The train was absolutely full in spite of inclement weather and for once I was glad for the press of bodies around me on a train. We arrived in Yokohama to do the high snow walk from the railway station to the office where we were to meet and discuss development projects. Then at lunchtime we again slogged though snow banks to a local Japanese restaurant where I watched fascinated as I observed the ceremonial eat fest unfold. On a scale of one to ten, with ten being excellent, I give Japanese food an eleven. Meetings over, I was again accompanied on the slow snow slog back to the station and eventually the hotel.

Eventually the storm passed and I found myself on a bus on the way to Narita airport. Roads were jam packed and we crawled through Tokyo for an hour before traffic eased and we were able to make a dash for the airport.

Thoughts of the warmth of Singapore and its freely moving traffic crossed my mind as I watched the city underneath move out of my line of vision at snails pace in that first hour on various flyovers. But as we sped into the countryside once again I was treated to a unique rural community’s architecture as we sped along the freeway. Later I was to see that same countryside many times, and each time appreciated the beauty of this unique country; especially at cherry blossom time.

I’d survived my first trip to the north in winter, and so was prepared for all eventualities when again assigned to the north the next year, and the next, until my ten year contract was complete in 1995.