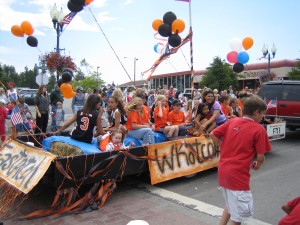 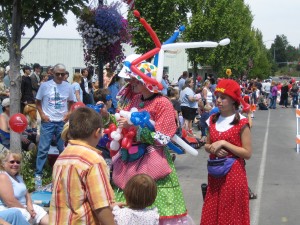 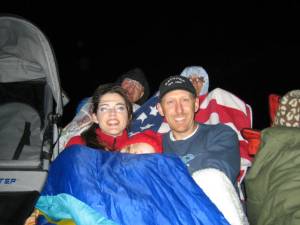 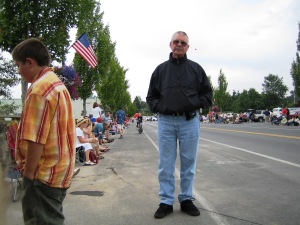 July 4 1776 was the birth of this great nation. An association of diverse communities banded together to form a political entity which eventually evolved into the United States we know today. Here we were on July 4 2006, two citizens from “Down Under” who were there to celebrate our daughter Gina’s first Independence Day as an American citizen. Naturally she wanted us to be part of the event.

We gathered our tribe together and headed for Blaine Washington State which peeps over the bay to the Canadian community watching the fun from an opposite shore. It was obvious from assembling crowds in that small community this was to be a big celebration. Parking our car far from the main parade route we wended our way through the thickening crowds. Most had already staked claim to the best vantage points and were comfortably seated in their chairs with adequate food and drink to see them through the waiting time and event which was to entertain us for the morning.

People of this town were obviously quite productive. Children outnumbered the adults and were everywhere waving their flags and balloons enjoying the freedom to shout and run at will while parents discussed more mundane matters with their friends. A patriotic person was handing out flags to those who did not have one and severely admonishing all to wave the flag. We waved our flags in obedience.

The parade began with all expected pomp and ceremony, but quickly reverted to the fun event everyone was expecting. The mermaids did their thing, dancing girls entertained, bands played and marchers marched. Each float had its contingent of children whose obvious goal was to pelt candies at appreciative youngsters milling around floats, and hopefully score a hit. Fire engines growled, ambulances hooted and ancient cars spluttered along with their drivers in period costumes, many inviting us to vote for them for one reason or another. Horse drawn vehicles appeared in abundance, but my vote went to the vehicle pulling a horse behind it. Now that was role reversal at its best!

After a long line of advertising floats the procession ground to a halt and people rose to investigate other forms of Independence Day entertainment. None being in evidence they jam packed the streets around street stalls selling everything from food to trinkets and continued their visiting with friends as they munched huge burritos and hot dogs. This was a crowd which was obviously not finished with the day. We bulldozed our way through the crowd and headed back to Ferndale to rest up for the evening entertainment.

Now at this point of the story it would be well to inform the reader that in the northern part of Washington State they have four seasons in one day. It so happened that the rest of the afternoon was blistering hot by local temperature standards and this lulled us into the belief that evening fireworks in Bellingham would be a pleasant warm and inviting occasion. So when Gina suggested we wear warm clothing for the event we did not take that caution very seriously. We donned our coats and headed for the car at 8 pm enjoying the pleasant cool of a Ferndale evening.

On arrival in Bellingham we were amazed at street after street of jam packed cars. Occasionally you would find a car parked in the most unusual circumstances with headlights beaming with the pleasure of a difficult problem solved. Obviously the fireworks display was going to be a big affair. We parked far from the vehicle crush and prepared for our long trek to the event site.

Stepping outside the car we received a swift wake up call. Had Jason somehow missed the exit and ended up in the North Pole by mistake? This was the coldest I had been since visiting Korea frequently in December in the 1990s and it was obvious we were ill prepared for a comfortable evening out on the headland overlooking the bay. This was summertime!

An assortment of people crowded us as we made our way to the headland shivering as we walked. Most had winter coats with hoods and an assortment of blankets and sleeping bags, but along with them were hardy souls walking nonchalantly in their shorts and tank tops seemingly unaffected by the deep chill. I glanced across the bay to see if there was an iceberg anchored there, or perhaps an advancing glacier from the snow capped mountains in abundance around this state. It was more than wind chill.

We found an unoccupied spot on the headland close to friends and set up camp bracing ourselves against the gale force winds. Fellow campers noting our distress began showering us with blankets in an act of compassion and we gratefully accepted each one. As we were assigned the two chairs brought with us we provided a convenient wind break, but the packed people in front provided warmth enough to keep us alive.

Waiting for the program was a painful exercise, but eventually the show started and we were treated to a spectacular display of fireworks. It had been worth the suffering after all. Jason had cleverly chosen our parking place, and while those who had parked close to the headland spent the next hour finding a way out of their predicament, we were on the freeway within minutes and heading home to our warm and inviting beds.

Our first Independence Day celebrations in the USA were at an end. Oh! In case you may want to attend a future fireworks display on July 4 in Bellingham, bring your long winter underwear and a fur coat to wear over your three layers of sweaters. Don’t be fooled by the locals walking around in their shorts and tank tops.

9 thoughts on “Independence Day in the USA”