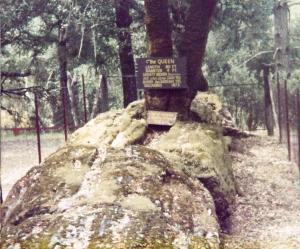 Some time ago I took a trip to California State,
The tourist guide had urged us there to look.
A tree now petrified for years the guide book did relate;
Five hundred years according to the book

Columbus first had viewed this land in fourteen ninety-two,
The tree was but a seedling at the time,
And so the tree inched taller as the years by quickly flew
Until that noble tree had reached its prime.

This giant of the forest grew to be both tall and strong
And evidence of lightning strikes was there,
The climate changes ranged from hot to brutal winters long
This evidence apparent everywhere.

But nothing could uproot that tree it still stood straight and tall
It wasn’t going to perish of old age,
So what would make this giant of the forest sway and fall?
A lightning strike or changing climate stage?

No, something much more sinister would bring it to the ground,
For deep beneath the tree’s protective skin
The tunnels of small beetles in the trunk could now be found,
They’d eaten ‘till the outer shell was thin.

And then a gentle breeze one day caressed this stricken giant
It shook on weak foundations for a spell,
While telltale cracks would soon appear in trunk no longer pliant
The beetles had performed the tree’s death knell.

And so it is with humankind, some like that giant tree
Grow socially mature and stand tall,
But beetles of deception in their life eat full and free
And weaken even giants ‘till they fall.