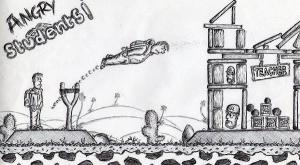 The above image belongs to http://www.jokeroo.com/pictures/funny/angry-students-2.html

It had been a terrible week for all of us. Our usually tranquil campus had become a seething mass of angry students who were either trying to force administration into liberalizing programs, or desperately trying to protect themselves from militants. The College President was under siege and calmly trying to ride out this storm, while faculty debated ways and means to reach into minds of the militant students and understand what their problem really was, and what dangers the College would face in conceding to any of their demands.

Our cafeteria had been occupied for several days, and even sensible students were enjoying a sudden increase in meal servings. Militants elected a complete student ‘faculty’ from among their group, while their representative student police patrolled the campus in appropriated college and teacher vehicles. The atmosphere in both men’s and women’s residences was electric. Foreign students had left belongings behind and with their passports taken up temporary residence in town. All students carried knives and clubs for their own protection in case militants targeted them. Once in a while militant students would go on an orgy of destruction, and rumors of arson against faculty homes rippled around the campus.

The real police riot squads camped outside campus in force, waiting for permission from the College President to enter college grounds and deal with dissidents. They had a formidable store of weapons which would have settled matters quickly, but the President hesitated in giving his permission, realizing the majority getting injured in a police charge would likely be innocent bystanders. He sought every means at his disposal to broker a settlement before resorting to police intervention.

We suffered collective shame, both sensible students and faculty of the college. The former were ashamed because they lacked courage to deal with militants; the latter because they felt they’d missed an opportunity to demonstrate acceptable social responsibilities in their teaching assignments.

The shock of this climactic violence brought the strike to a halt. Militants were angrily advised to move off campus under peer pressure and with a wary eye on the police convey outside campus they crept away in the night. Students remaining started to pick up the pieces and made peace with the administration.

Resolution to a very serious situation was made possible by one brave student who dared to stand up for reason in spite of consequences he knew he’d suffer. He was rewarded liberally by a grateful administration.