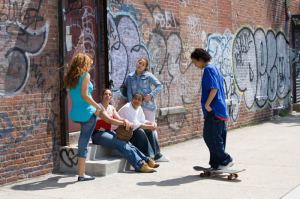 He couldn’t bring himself to fight the leader of the pack,
Too many had already tried but most had not come back
His family they were wretched poor they’d fled the cussed war
And were located in this slum no better than before!

The family told before the war they’d known of better days
They had to leave all things behind, adjust to different ways,
And it had been quite hard on him to live on danger-street
His favourite haunt was city square where slum and affluence meet.

A clamour from the street below now caught his restless eye
The pack was calling for his blood, was this his day to die?
He sighed and headed for the door, ‘twas better to be dead
Than be a coward all his life just as the pack had said.

Unwillingly through open door he stepped on pavement cold,
And in that fateful moment he decided to be bold
Perhaps he wasn’t tough enough, or streetwise it was true
But family pride can courage give, he’d fix this useless crew!

With lusty yell he charged into the leader of the pack
And soon to everyone’s surprise he had him on his back.
The startled pack retreated to a safer distance near
And when the leader slunk away they gave a nervous cheer.

18 thoughts on “Climbing the Social Ladder”