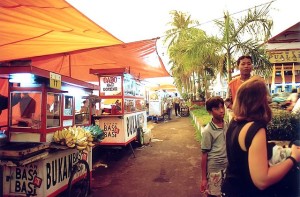 The sign on the way into the transit lounge at the airport said, “Inconvenience regretted,” and I instantly understood the reason the sign was in place. I was in a small airport in a topical location away from the major air transit routes. The heat was overpowering, and beat all of the passengers into lethargic submission causing us to head purposefully in the direction of the waiting lounge beyond work in process. Sitting on the floor pounding imaginary bumps with hammers was the floor repair crew. They seemed to become more energetic whenever an announcement was made making it impossible to hear what the announcement was all about. I passed the time of day with one of the passengers in the transit lounge. They recalled passing through this same airport a week earlier, and was convinced the repair team were still working on exactly the same spot.

A bemused German couple struggling with Basic English stood under PA system speakers trying to make sense of the announcements. Whenever an announcement was made they’d rush with the crowd toward the departure gate along with passengers trying to board their plane. They’d been turned away several times during my transit time, and were visibly distressed. There were other tourists suffering with the same complaint. Airport authorities had good reasons to put up their sign, “inconvenience regretted” that day.

Eventually the German couple gave up trying, and I noticed them nodding off to sleep after some time had elapsed. I took up vantage point next to the coupon collector at the door, and read printed destinations on the ticket stubs he collected over his shoulder. In spite of the floor repair crew, and garbled announcements, I was out the door as soon as I recognized a distinctive sign of my destination printed on tickets then being collected. I hoped the German couple had awakened in time to catch their plane.

There was free seating on that flight so it was a grand race across the tarmac to our aircraft dragging carry-on luggage behind. The noise of racing carry-on luggage wheels on tarmac hung in the thick topical air causing flocks of itinerating birds to rise in startled surprise. I was glad we were not scheduled to travel by jet from that airport as I imagined meeting a flock of birds with a prop aircraft a little safer than a jet We were racing for the prized seats on that plane and it was survival of the fittest.

As I eased into the captured seat on that plane my conscience began to bother me. It would have taken a massive effort to fight my way back to the German couple through advancing pushing crowd of boarding passengers to find out if this was their destination departure gate. Should I have made the attempt? I tried to console myself that they should have persevered and watched for the signs, even if the sounds were confusing.

Then looking to the back in that crowded aircraft I saw looks of dismay and resignation on faces of those contemplating those uncomfortable seats. Conscience or not, I’d probably made the most sensible choice and congratulated myself for being up with the front runners in the race to the aircraft.

I’d soon be on my way to Singapore and home.