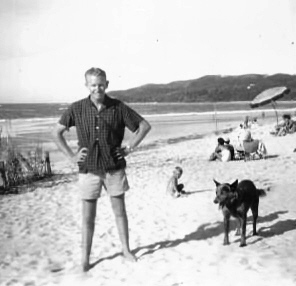 It was in first year of High School I met Les. Actually his name was Brian, but for some strange reason I’ve never been able to understand his whole family called him Les. He was a quiet boy; one you’d never suspect of any mischievous intent. He wore his halo with the cool air of the innocent, but lurking deep inside was a hidden well of mischief. I sized him up in an instant when we were assigned to sit together in class and decided we were two peas in a pod. I decided to make him my friend, and partner in any activity designed to create interest.

Les was a source of great inspiration. He showed me how to insert a pin through the inner shoe so that it protruded through the front. Then with calm deliberation he’d gently lift his shoe to the portion of the seat in front of his desk that exposed his target occupant’s posterior and give it a playful jab. This would result is said occupant rising rapidly, hitting his desk causing books to scatter and pencils to fly through the air. The teacher who was a stern disciplinarian would march said student into a corner for disturbing the class. Now the student tried vainly to seek justice, but a search of Les’s pockets and belongings failed to reveal any telltale sharp instrument and the target was sent to the Principal’s office for counselling as it was assumed they were not being truthful. Teacher never dreamed of looking at Les’s shoe for the sharp object!

One day I visited Les at his home and noticed he’d been conscripted to clean out the rain water tank. He was busily engaged inside that tank, appearing now and then through the manhole to deposit sediment on top for later disposal. Now that I understood Les enjoyed a little humour I decided to give him a chuckle or two so emptied some of the sediment back through the manhole. The black face that emerged through the manhole was expressionless except for the eyes. Those eyes told me it would be safer if I were not around when he fully emerged from that tank.

However after ignoring me for a few days at school Les regained his customary good humour and cast about for more voyages of discovery. One morning he appeared with a small glass vial corked shut and invited me to take a sniff. Now as I’ve already told you I’d sensed on our introduction we were two peas in a pod, so reason told me not to open that vial. I refused, much to his disappointment. He explained one of his friends in the chemistry class had introduced him to this brew. The friend had termed it “rotten egg gas!” Naturally Les went and purchased some from the local chemist that same afternoon.

While the English class was well underway Les lifted the lid and an unbelievable stench overpowered the room. Students were coughing and gagging, and the teacher inquired if somebody needed to make a hasty trip to the bathroom. He invited whoever that was to depart immediately before the whole classroom was overcome by the smell. The whole classroom emptied immediately and headed for fresh air to the puzzlement of the teacher. Each student was blaming the other for being indiscreet in the classroom, but no one suspected Les whose halo remained in perfect alignment over that innocent face.

While we’d opted for the course of studies leading to a business future the rotten egg gas experience raised Les’s interest in chemistry and his diligent inquiring mind led us to experiment in new areas. The chemistry class was dealing with the theory of propulsion and explosives. Les took an active interest in the wide eyed reports of experiments in the lab and this resulted in further trips to the chemist, and shops that dispensed fireworks quite legally in those ancient times. We conducted our experiments after school in the sand tailings from played out mine fields across from our home.

First experiments were compared with the “big banger” fireworks as to their relative destructive potential, and eventually we managed to produce an impressive sand cloud with our home made explosives. Well, that was sand, how would it work on something constructed with wood?

So, for the trial we selected the High School Principal’s letter box, the timing of the experiment was to be evening when everyone was well settled in their favourite lounge chair listening to the radio’s current soap opera. Now the Principal had selected as his place of residence a house opposite the Catholic Cathedral. No doubt he reasoned with the giant statues standing guard to the front of the church and overlooking his house he would be well protected by the agencies of heaven. That was not to be!

After lighting the fuse we retreated to a vantage point far down the street away from the scene of the crime and awaited the results of our experiment. There was a loud explosion, the box disintegrated and we retreated to an even further distance away from that crime scene. Within minutes there was a crowd of neighbours gathered around the gaping hole wildly gesticulating and talking in loud voices. Not long after that the Police arrived with sirens screaming. We decided it was time for bed and rehearsed common stories to tell our parents as we made our quick departure from the scene. The presence of Police in force at our school next day dampened any future thoughts of experimentation and we lost interest in the chemistry class entirely.

In our final year of High School Les and I enjoyed our games of naughts and crosses under the desk while lectures were in progress until caught out by a teacher who was a lot smarter than we were. That teacher gave us an ultimatum. Stay in after school every afternoon of school for two hours doing whatever was assigned to us until final exams, or be automatically failed! We chose to follow the teacher’s directions, and we graduated.

Many years later I found myself to be a teacher and sometimes administrator in the educational system. I had occasion to reflect from my experience as I sat in judgment on students in the disciplinary committees. Adults can be rather hypocritical! The first reaction in our maturity is to ask why the student under discipline attempted something so dumb and stupid. The second reaction is to conjure up some form of stern discipline to be administered showing such foolish ones it doesn’t pay to engage in anti social activities.

But fortunately I reflected on my own foolish years and the fact I’d eventually woken up to myself and determined to do things that contributed to society rather than cause havoc. I was thankful for the teacher who laid it on the line, corrected me, but did not destroy me in doing so. I determined to treat any wayward students I’d come across in the same enlightened manner.

Correction should not destroy, but rather build discipline along with encouragement to ensure a person reaches their full potential in life unshackled by past foolish mistakes.

8 thoughts on “My Friend Les”