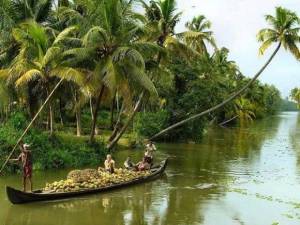 I clearly remember two of my auditing experiences in Trivandrum, that capital city of the beautiful state of Kerala, India. If you’re turned on by thoughts of waving palm trees, sparkling white beaches and a tranquil ocean dotted with small fishing canoes far out to the horizon, then Trivandrum beaches are the place for you. Once you’ve been there you’ll be tempted to stay.

However no large city is immune from the occasional sober thought, and I’ve two memories which reoccur and give me occasion to be somber, or to smile.

On the first of these occasions I was traveling with one of my colleagues, a true son of the soil and mentor of sorts in the art of surviving within the culture. This was the man who taught me the art of fighting my way onto a bus with “bahar ka admi” (foreigner’s) luggage. He had the good sense to travel with a fraction of my imagined needs and it took a few trips with him to make me a convert. In one of my other stories I give a description of a bus adventure that changed my attitude to personal luggage and politeness.

We arrived in Trivandrum as it was then known tired and hungry, and after placing luggage in our rooms immediately commenced auditing work. We were running behind schedule and attempting to make up time so we could take advantage of train seat reservations. To miss these would mean an all night onward bus trip, or standing for hours in a third class carriage. Been there, done that, and didn’t want to do it again!

We’d noted an eerie calm around the city as our taxi deposited us at our audit target. While calm was unusual in a bustling city our minds were focused on auditing and we brushed curiosity aside to focus. However by evening having missed out on breakfast and lunch we were ready for action and commenced our walk to the city center thinking of all the goodies we were going to enjoy. One block from our destination we came face to face with a roadblock and soldiers with a menacing machine gun placement. We were angrily waved back. Inquiries from a nervous local watching from half open doorway told us the city center was locked down due to riots.

But hunger is a strong urge, and taking council together we determined to sound out some alternative routes into town. The people of that area are renowned problem solvers, and surely there was someone open somewhere to offer solace to our starving stomachs. There always had been in the past, but this time it was different. Each of the routes tried produced the same result. Angry shouts and guns pointed in our direction. We had another look at the dilapidated banana stall still open near our office in the suburbs. Even the hungry had rejected what he had on offer, but we bought and ate that rotting mess.

The next day there were distinct howls of protest coming from our collective stomachs and we were beginning to get those distinctive headaches that come from enforced fast. Those stomachs needed attention, and just wanted to remind us in case we’d forgotten to do our duty. We struggled through another day, one of our group having found a few biscuits among his sparse travel items, but by evening things were getting desperate.

I decided it would be better to be mowed down in a hail of bullets than continue on without a meal, and pulled my unwilling companions along to translate for me. Surely the soldiers would have mercy on a starving foreigner, they having been well fed the past two days. But it wasn’t to be. Once again we were waved back in spite of passionate pleas.

At that point my mentor once again came to the rescue. He informed me there were places to eat, but not places a foreigner would be seen dead in. He could have been satisfying his needs, but in deference to me had joined my in hunger. Once again I said, “Please teach me!”

He took me through the fields to a dilapidated mud building with rotting grass roof. It was dark inside as they had no electricity, but we bent down and entered the small room. As eyes became accustomed to the darkness we could make out a long table with thin men seated eating a concoction from tin plates. My friend spoke to one of the diners and took his plate outside motioning for me to follow and inspect. It consisted of the dregs from old discarded fish bones and a little watery rice. My stomach signaled approval and without hesitation I said, “I’ll have one of those!”

So my mentor in one short lesson showed me how a large segment of humanity in that city lived and survived each day. I came out satisfied and having paid but a few cents; thankful for the chance location of birth that had provided me with so much in my life time. Every meal I’ve taken since that event reminds me of how others live, and the huge responsibility those more affluent have to share of their good fortune.

The second culinary event I remember well also took place in Trivandrum. Now I was traveling with a fellow expatriate auditor named John. Once again we were on a tight deadline and had worked through the day without meals. This time there were no soldiers to prevent us, but by the time we were finished our work it was 9 pm. Would we find an open food stall in town to satisfy our hunger?

It was difficult, but we did find a place still willing to serve us and ordered the delicacy of the day. Fresh fish and what we understood to be a vegetable. The fish was as described, a delicacy, so we finished that with a flourish and turned our attention to the green “vegetable.” It had the appearance of a cooked green capsicum, and John was the first to attack his with the ferocious bite of one possessed of great hunger.

John’s face froze with surprise and a torrent of speech issued forth from rapidly moving lips without sound. Perspiration appeared on his brow in great drops and tears flowed freely down his cheeks. He emptied his glass of water, then grabbed my glass and emptied it too, holding up his hand limply to try and catch the attention of the waiter. He needed more water to quench the raging fire.

So if you happen to be in Trivandrum late at night and feeling peckish I can certainly recommend the fish. But if they happen to mention it comes with a vegetable examine it carefully before plunging in. As a precaution keep a five liter can of drinking water close by to put out the raging fire. The green chilies of Trivandrum are of a giant variety, are disguised to look like green capsicums to fool unwary foreigners, and definitely have the “shakti” (invincible strength) that makes India a land of great souls.

For those who would like to know more about Trivandrum please visit the URL below:
http://www.cs.cmu.edu/afs/cs/user/vipin/www/trivandrum.html

13 thoughts on “Trauma in Trivandrum”