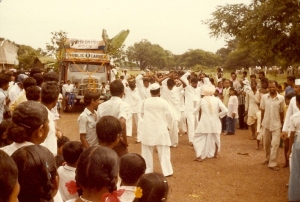 It was a Saturday afternoon and I was attempting to rejuvenate my body before facing the rigors of another week. In a boarding college you’re more or less on call twenty-four hours a day so it’s wise to get rest whenever the opportunity presents. I must have dozed off because I didn’t hear the phone ring until my daughter gave me a gentle shake and told me I was wanted.

Now the call was a strange one indeed. The voice sounded like a disembodied spirit from another world, and the only words spoken were “Come quick sir!” There was a resounding click as the phone was slammed back into its cradle. It was probably another hoax call. Boys will be boys! I grinned as I thought of the many times in misspent youth I’d phoned at random and given similar silly messages to uncomprehending recipients. I headed back to the couch to continue my slumber.

But it was not to be. Within minutes of the call there was a sound of tumult at the front of our home and a loud banging on the front door. I hastily put on something more presentable and opened the door. There in front of me were two of our college security student workers, and close behind was a wildly gesticulating crowd of students and passers by. This time the urgent “Come quick” had the desired effect and I followed the crowd at a loping run not knowing where I was headed or what to expect when I arrived at my destination.

The crowd came to an abrupt stop in front of the security office in the middle of the campus and stared at me looking for an instant response. I located the student in charge of security for the day and inquired what urgent problem had brought me at the run to what looked to me like a non-event. The students were obviously angry about something as they pushed me over to the window to look inside the security office. As everyone was shouting explanations at once I had a hard time piecing the story together.

I exhaled in surprise. There squatting on the security floor was a tiny ragged woman. The security room looked like a tornado had passed through as the normally tidy office was in total disarray. I motioned to the crowd to stay where they were and took the student security man to a quiet place to hear the story.

At this point I need to give you a few background details. It was a month before the monsoons. This is the time of year when temperatures soar beyond 45c degrees and tempers soar with them in that blistering heat. Our huge campus and farmlands were supplied with two deep wells which supplied a pressure tower sufficient for the needs of the campus.

However population pressures were beginning to spill over into the semi-rural area our college occupied next to the botanical gardens and university and a vast sprawling village exploded next to our campus on adjacent farmland. These new settlers proved to be aggressive and began to invade our campus plundering, and fighting with students and residents as they demanded water. At first some of our faculty felt sorry for the settlers and invited them into their homes to take water, but this was taken by the villagers as their right and an invasion ensued in which faculty and staff almost lost control of their own homes on campus.

An urgent college administrative committee was called to deal with the situation and several decisions taken. It was acknowledged the campus would have to be walled off to prevent community takeover, and access strictly controlled. It was also recognized there was a humanitarian issue to be dealt with. A village without water was a bomb that could go off at any time. We decided to give the villagers controlled access to water twice a day, and prevent them from entering homes, or being on campus at other times. The wall was hastily built under guard, and external taps supplied for village access which could be turned on or off by security men inside campus. But the villagers liked the unrestricted access they’d wrested from residents and security was under constant stress as they tried to manage a difficult situation.

That brings us to the situation at hand in the security office. Apparently the woman in question had instructed her child to get water at a time of day not scheduled for villagers to be near the campus. The child had been sent back by student security workers, but his mother had demanded he go back and fill the bucket. The child was caught entering another home on campus and security impounded the bucket. The enraged woman entered the campus and began to verbally abuse students, then removed her sandals and began to beat security workers on the head with them.

Now westerners will fail to comprehend the enormity of this action. First of all the shoe is considered unclean in that part of the world and the worst possible insult to be given would be to use the shoe against another person. To add further insult, in the community our security students were drawn from touching a person’s head was another gigantic insult. While some of my readers may not understand it, people could die from such an insult.

I noted the wildly gesticulating crowd gathered outside that security office. They were from that community. I had a very big problem to deal with. The woman was from a local community and they were angry about restricted access to water. The students were from a different community who’d been grossly insulted. Solving one problem could create another!

Then the student in charge gave me valuable information. The aggressive ragged woman squatting on the floor of the security office turned out to be the wife of our farm tractor driver. The man was called for, and through a translator the situation was explained. The man could see the potential for losing his job on the farm and apologized profusely expressing anger at his wife’s foolish behavior. We then explained the delicate issue of the ‘slippering’ as slapping with a shoe is called there and the crowd gave a bellow of anger. He understood the danger to his family if this insult was not rectified. He asked to see his wife.

The security door was unlocked and the woman appeared. Her aggression disappeared when she saw her husband. Then without warning the husband rushed forward and began to beat his wife unmercifully. The woman screamed with each blow and the crowd who’d been demanding revenge fell strangely silent. The student security worker who’d been insulted intervened to save the woman from her husband’s wroth. “That’s enough,” he commanded. The crowd nodded in agreement, the insult had been satisfactorily avenged.

Then to sweep away any lingering discontent over the insult to their community I called the student security workers who’d suffered the ‘slippering’ insult. They were commended for their restraint under provocation and it was announced each of them would be given a new suit of clothes as a reward. This was a priceless gift in that environment and their community crowd of supporters cheered the announcement.

One month later these students decked out in their new attire knocked at my door to offer thanks for their reward. While the event had its brutal side everything worked out for the best. The villagers outside campus who’d heard of the issue and its results fell in line with campus regulations and there was no more aggressive behavior over water. They even expressed gratitude for college administrations consideration of their needs, no doubt under pressure from the farm tractor driver who lived among them and was concerned about his job. Security student workers marched around the campus as heroes to the satisfaction of their community and peace reigned again on the College campus.

6 thoughts on “All Because of a Bucket”