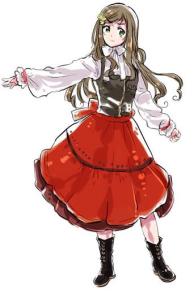 The above image belongs to http://www.cosplayisland.co.uk

It was her first day at school in a brand new country. Mother had fussed over dressing Ilonka for this special occasion and she was dressed in the finest clothes they could provide from the country they’d been forced to flee. Traditional dress with all the embroidery and aprons that marked Ilonka as European stood out as she viewed herself in the mirror with pride.

Mother stood at the door with one of those proud smiles parents can be seen wearing as they watch their children at work or play. Only when Ilonka was completely satisfied with her appearance did she hold out her hand for her mother to lead her on to her new school.

Ilonka could hardly contain her joy. It had been so long since she’d attended elementary school in Europe and she’d missed the fun and games with her friends terribly. In her childish imagination she placed her new school, which she hadn’t yet seen, in a familiar setting with surrounding Black Forrest visible in the distance and the rolling green slopes on which animals grazed close by. The provincial language of her teachers intruded into her memory.

Concrete factory walls they passed as they walked did not fit into that scene, but Ilonka somehow imagined those unfamiliar and unfriendly walls would soon give way to the familiar scenery she longed for. But when they arrived at a gate in one of those concrete walls and walked inside she turned to her mother with a puzzled face. Where was her school, and why had they diverted to this place?

She looked around in alarm. Where were all the elementary students? There was no one dressed like her there. There were children in abundance in their sweat shirts and jeans playing around on the large campus inside the wall shouting to each other. Then almost as one they stopped what they were doing and stared at Ilonka as she made her way with mother to the administration block. They followed at a distance whispering and pointing. Ilonka began to feel very much out of place and turned pleading eyes to mother.

Mother looked at Ilonka with compassion as she steered her into the administration building to attend to formalities.

Mother was used to this. War in Europe had pushed the family from one place to another constantly re-inventing their place in society and desperately trying to survive their dislocations. She’d hated the obligatory urgent move from one culture or one language area to another. She knew Ilonka was too young to understand how they’d somehow protected her within their own family culture through it all. She knew what was ahead for Ilonka, but it had to be faced. There was no alternative. She would have to now add English to the two languages she already understood and learn to fit in to this new culture. Ilonka was no longer a baby.

In broken English mother explained the situation to the school head. The headmistress was a kind lady and promised to take personal interest in Ilonka’s well-being and entry into what she understood would be a terrifying experience. She spoke kindly to Ilonka who turned to look at her mother pleadingly to understand what was happening.

Mother could barely restrain her tears, but remained silent. This was something Ilonka had to work out herself. She knew it, the teacher knew it, but Ilonka didn’t.

With firm voice mother told her to listen to what the teacher told her. She’d be back to collect her after school was finished for the day. Half way across campus Mother finally broke down and tears flowed freely. The children gawked, pointed and laughed as she hurried through the gate.

The Headmistress had been through this experience before. A lot of migrants had come to this country from a devastated Europe. Language was the first barrier to their success in a new country and their children had suffered much in bridging years between no comprehension of what was going on in their school to comprehension and excellence.

The trauma of orientation caused some to drop out and spend the rest of their lives in unsatisfying roles in society. But most had used that trauma to seek skills more diligently than local children so they could rise above the laughter and gain the respect they craved. Later a grateful nation would acknowledge the value of their achievements.

Ilonka’s first years were so traumatic much of it was a black hole her memory could not later penetrate. She’d later remember though people laughing at her accent, her clothes, her food and customs. She remembered the initial shunning by school children, which was counteracted by the kindness of teachers.

But she’d also remember laughing at words in English which had much different connotations in her family language than her school teachers would have wished to communicate.

Her overall aim though was to assimilate and excel, and that she did.