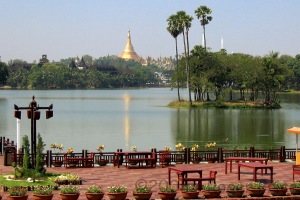 My first trip to Myanmar was a real eye popper. It was early 70’s and I’d been assigned responsibility for looking over project books to ensure money sent was flowing in the right direction. I’d the choice of taking the long slow train to Calcutta (as it was then called) and hop across the bay to Yangon on their national airways, or fly in on Thai air from Mumbai. Well, there really wasn’t any contest there, Thai food happens to be one of my many weaknesses.

I’d been to remote locations in Asia, but nothing I’d seen up to that point prepared me for Yangon. It was like someone had swept the country up and put it in a time capsule to be opened centuries on and examined as a curiosity. The airport resembled those shown on black and white movies of the forties and required a long march from the tarmac to sparse examination areas in customs and immigration. Foreigners were a curiosity and not welcome in that era. If you could get a visa it allowed you twenty-four hours as a stopover on your way to somewhere else. This was the Burma Way to Socialism, and the military government felt it needed to protect the population from potential bad influences in the rest of the world. They were particularly sensitive to capitalist influence.

We crept into town in a forties vintage taxi along almost deserted roads. I have to say the roads and footpaths were some of the cleanest I’d seen while travelling in that part of the world. Sweeping streets appeared to be a major employment opportunity. An occasional army vehicle filled with soldiers passed us and slowed to study this foreign curiosity. We were a rare bunch indeed in that era and represented a colonial era making me an object of suspicion for the duration of my stay. Where was everyone? For a capital city there seemed to be a dearth of population until we made it into the centre of Yangon were I was assigned to stay.

Surprisingly my taxi driver was fluent in English, but obviously didn’t want to get into a conversation he’d have to explain later when questioned. Big Brother was present everywhere! The taxi driver did inform me the Thamada Hotel I was booked into was called President Hotel in pre-revolution days. I was provided with a key at the front desk and pulled my luggage upstairs to find the room assigned. The half full bucket in the middle of the room catching a leak from the roof looked ominous, but the room had a bed, bathroom and hot water and that was all one really needed

I had the rest of the day to myself, my appointment being for the next day. What could I possibly see in a few hours? I’d have to fly out next afternoon because of the twenty-four requirement so had better make it snappy. No tourist stuff at the desk, but there were a couple of English language newspapers that would give me a quick guide on things to see and do. Unfortunately the Guardian and the Working People’s Daily presented exactly the same news. Interesting stuff like General X facilitated at the People’s Bank. Obviously I wasn’t going to get any tourism hints there.

So I decided to do a walking circuit of the inner city and see what kind of entertainment I could find. The man standing by the door, who I’d erroneously thought to be the welcoming person fell into step close behind me and followed me on my sightseeing tour. Had he been assigned as my own personal bodyguard? Yeah, right! I stopped to look, he stopped to watch. I broke into a jog, he jogged pleasantly behind me. This was a bit distracting!

However there were things to see and it was interesting to reflect in the 1970s how people must have lived in old Yangon (Rangoon) in the early twentieth century. They were still living in that era. The women all sported markings on their faces, which I discovered were considered to be a beauty treatment. After a while it became the norm and looked rather cute. The city centre did have much more of a bustling appearance, but buildings were run down and rusted. Looking at the architecture you could see this was once a beautiful city left to age without anyone caring. There was no excuse for this. Myanmar was resource rich, but that richness was either mismanaged under this regime or gravitating in directions which didn’t benefit the people.

The Golden Temple (Shewdagon Pagoda) loomed large over town. That was the only treasure preserved in its glory, but a trip there would have to wait for my next visit as I only had twenty-four hours and a lot to accomplish in a few hours next day. Incidentally, the Golden Temple’s a must see for those of you considering a trip to Myanmar. The regime has loosened its tight grip considerably now, tourists are welcome and the cities spruced up to showcase the Burma Way to a now very much changed Socialism.

So my time at a premium, and my companion becoming rather irritating I headed into the Bazaar area. The Bazaar was the last remnant of capitalism permitted in those years. My entry created an instant excitement and dollar signs appeared in the eyes of the crowd instantly materializing around me. My bodyguard had a hard time keeping his assigned close proximity as he was elbowed aside for some good capitalist bargaining. His face took on an air of desperation. He was no doubt thinking of the session that evening as he reported on my movements of the day.

Then I felt some strong tugs on my leg. Was someone trying to pick my pocket? Think again! My documents were safely planted in a plastic bag inside my underwear. If anyone messed with that area I’d be aware of it! No, this was a cute little girl, a bit ragged looking but there was something about her that caught my attention and sympathy. She was not begging, just tugging urgently and pointing at a stall in the Bazaar. I decided to follow her, accompanied by the surge of humanity surrounding me.

To my amazement she addressed me in broken English. She wasn’t at school, but she knew English? I was intrigued! With authority she handed me item after item urging me to buy. There was nothing in that stall that remotely interested me, but this little girl made me curious. So I asked her if she was employed there. I will never forget her response. “Sir, this is family stall!”

In that poor city with all its regulations and a fear of authority this little girl stood out for her dignity and confidence. She wasn’t concerned that Big Brother was there watching what I did and noting anyone who engaged me in conversation. This was her Father’s stall and she was going to shoulder her responsibilities regardless of circumstances. I picked up the nearest piece of junk and paid her an outrageous price for it. Big Brother shook his head in amazement, and the watching multitude pounced on me for some of the action. But I smiled politely and elbowed my way through the crowd to return to my hotel, much to the relief of Big Brother. The population had been spared foreign corruption for the next few hours, and he could relax at the door of the hotel once again.

That evening I made one of the big mistakes of my life and decided to luxuriate in a hot bath at the hotel. By the time I reached Singapore I had a raging fungal infection that took powerful medicine to remove. But it didn’t give up easily.

The regime in Myanmar has made grudging progress, and it’s possible to tour the country today without major harassment. Hotels have improved considerably and there are increasing business opportunities. The old 24 hour rule is long gone.

I’ll always remember my first trip to Myanmar, and the little girl who did everything she could to contribute to her family survival in spite of the difficult circumstances she lived in.