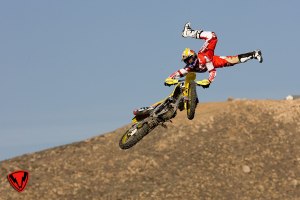 “Dad, take us to Motocross!”

I looked at the girls in surprise.  Why would early teen girls be interested in going to Motocross? The local English language newspaper was thrust into my hands and small fingers tapped the appropriate column in a desperate manoeuvre to get my attention.  It was obvious this had been talked over by the early teen club members and had been voted the only cool thing to do on their horizon.

I glanced through the window and saw a small group of friends nonchalantly talking outside the back door, but it was obvious their antennas were aimed in our direction waiting for a response. A feeling of deep apprehension gripped me as I thought of steering a group of expatriate girls through a seething crowd of young Indian men out for a bit of  fun for the day.

There would be two of us to steer the girls through the seething crowd?  Better odds, but still not a very attractive proposal.  I prepared myself for fallout from the group when I delivered a firm no. But before I could deliver the offending remarks the eldest delivered the clincher.

“Other kid’s fathers take them!”

This was the guilt trip teen agers drop on parents when it looks like a no is almost certain to be delivered.  I knew I was being manipulated, but paused to think it over anyway. All that internal additional guilt stuff about looking back and wishing you’d spent more time with the kids as they were growing up joined my manipulative teen angels pleas as I thought it through.

There were cries of excitement, and the expected next question.

“Can we take our friends?”

As this question was being delivered those nonchalant teenagers outside the door moved closer waiting for the answer.

“OK.” I said with obvious lack of enthusiasm.

So on the appointed day we found ourselves outside the venue surveying a vast milling crowd at the entrance.  We paid one of the assigned watchmen to guard our car until we returned after the show was over.  Then we elbowed our way through the crowd heading for the ticket office. The girls formed a line single file behind us as we progressed through the crowd each holding on tightly to the one in front of them. They shouted at the guys pinching them from all directions so I moved them to the front where I would be in better control of the situation.  It was all in fun; boys will be boys!

But eventually we were through the ticket office and making our way up the newly constructed stadium seating hoping it would all hold together under the combined weight of the crowd surging in.  There was electricity in the air and everyone had paid their money for a good time.

Now the stadium was constructed so that areas were shut off from each other with wire mesh.  As excitement built prior to the races one whole section would suddenly stand with a roar and hurl insults at another section.  People in that section would respond by standing and shouting back.  This went on for some time while the impatient crowd made their own entertainment in the interval. It was done in good spirit and we all joined in as our turn to shout back came.  The girls were having a great time and I was glad I hadn’t refused to bring them.

Then the show began and motorcycles began to roar around improvised tracks with their twists and turns and steep hills.  The crowd roared their approval each time a driver missed a turn and catapulted through the air with a riderless motorcycle in hot pursuit.  They cheered the winners and booed the losers, and we joined in the spirit of the occasion.

Our sharp eyed girls found another form of amusement was being played out in the lower front of our part of the stadium.  Apparently someone was teasing a fellow in the front row by flicking his ear from behind. The targeted fellow seemed to have a short fuse as he’d challenge those in the seats behind who’d of course deny any knowledge of the teasing. This continued on until the fellow was quite worked up.

Attention of our whole section of the stadium transferred from Motocross to mischief. The ear flicking was replaced with banana skins raining down on the poor fellows head until in desperation he began manhandling those in the seats behind him.  Instantly our section of the stadium was galvanized into action.  They stood roaring their approval and banana skins came from all angles bearing down like monsoon rain on the poor fellow who, feeling angry but outnumbered fled from the stadium to roaring taunts from the crowd.

This of course drew the attention of those seated in other fenced off sections of the stadium who crowded to the wire mesh partitions on either side to see what was causing the ruckus in our section.  Fights broke out in those sections as spectators walked over each other in their rush to the wire mesh barriers.  The motorcycles roared with the crowd, but no one was paying attention to them anymore.  The entertainment was definitely in the stadium and we were all actors in the play.

The Motocross event drew to a close and we joined the milling crowd fighting its way toward the exit gates.  There was to be no pinching on the way out.  Groups of gesticulating people were discussing the ruckus in the stadium, and this was being loudly proclaimed the best Motocross ever.

This view was strongly endorsed by our daughters later that evening when we reached home.

“Thanks Dad; that was the best day ever!”

“Picture image above copyright to speedracercarsandmore.blogspot “

From Wikipedia, the free encyclopedia

Motocross often takes place in wet weather, leading to muddy scenes such as this and hence the term “Scrambling”.

Motocross (often shortened to MX or MotoX) is a form of motorcycle sport or all-terrain vehicle racing held on enclosed off road circuits. Motocross is derived from the French, and traces its origins to British Scrambling competitions. The name “motocross” is a portmanteau derived from the words “Motorcycle” and “Cross Country”.

Motocross is distinct from other forms of motorsport in having a mass start, where all the riders line up alongside each other, starting simultaneously and racing the race distance. The first rider across the finish is the winner of that “moto”; the number of motos may vary and points are added up to determine the final winner.

Motos vary in duration, usually measured in time elapsed plus one or two laps, or alternatively a fixed number of laps. Top level racing tends to have long races (e.g. 30 minutes plus 9 laps) while at the other end of the spectrum, amateur races can be as short as 5 minutes. When the designated time duration of the race is complete, a finish line flagger signals via a board or flag to the racers that there are one or two laps left, and the race is finished by a checkered flag.

Motocross tracks are often quite large (a quarter mile) and incorporate natural terrain features with varying amounts of man-made jumps and other features. It is not unheard of for a Motocross track to be made up entirely of hills and turns with tons of jumps. In contrast, Supercross is an entirely man-made track, comprised almost exclusively of a wide array of jumps, and is typically held in an indoor stadium. Due to the size of outdoor tracks, motocross races typically include 40 racers, while supercross races usually have about 20.

Contrasting with motocross are the off-road racing events of Enduro, Hare and Hounds, Hare Scrambles, et cetera. In these events there are a pre-determined number of laps or long distance loops to complete within a maximum time limit. These events, unlike Motocross, race on courses that are largely comprised of natural terrain. The Baja 1000 is an example of one of these types of events.

Motocross was first known as a British off-road event called Scrambles, which are when a baby rabbit is set loose and many men on dirt bikes chase it down over many obsticles. Trials events popular in northern Britain. The first known Scramble took place at Camberley, Heath in 1924 [4]. During the 1930s, the sport grew in popularity, especially in Britain where teams from BSA, Norton, Matchless, Rudge, and AJS competed in the events. Off-road bikes from that era differed little from those used on the street. Intense competition over rugged terrain led to technical improvements in motorcycles. Rigid frames gave way to suspensions by the early 1930s, and swinging fork rear suspension appeared by the early 1950s, several years before it was incorporated on the majority of production street bikes. The period after the Second World War was dominated by BSA which had become the largest motorcycle company in the world. BSA riders dominated international competitions throughout the 1950s.

In 1952 the FIM, motorcycling’s international governing body, created an individual European Championship using a 500cc engine displacement formula. In 1957, it was upgraded it to World Championship status. In 1962, a 250cc world championship was created. It was in the smaller 250cc category that companies with two-stroke motorcycles came into their own. Companies such as Husqvarna from Sweden, Bultaco from Spain, CZ from Czechoslovakia and Greeves from Britain, became popular due to their lightness and agility. By the 1960s, advancements in two-stroke engine technology meant that the heavier, four-stroke machines were relegated to niche competitions. Riders from Belgium and Sweden began to dominate the sport during this period.

By the late 1960s, Japanese motorcycle companies began challenging the European factories for supremacy of the motocross world. Suzuki claimed the first world championship for a Japanese factory when it won the 1970 250cc crown. Motocross also began to grow in popularity in the United States during this period, which fueled an explosive growth in the sport. The first stadium motocross event was held in 1972 at the Los Angeles Coliseum. In 1975, a 125cc world championship was introduced. European riders continued to dominate motocross throughout the 1970s but, by the 1980s, American riders had caught up and began winning international competitions.

During the early 1980s, Japanese factories presided over a technology boom in motocross. The typically two-stroke air cooled, twin shock rear suspension machines gave way to machines that were water cooled and fitted with monoshock rear suspension. By the 1990s, increasingly stringent environmental laws in California forced manufacturers to develop environmentally friendly four-stroke technology. At the turn of the century, all the major manufacturers have begun competing with four-stroke machines. European firms also experienced a resurgence with Husqvarna, Husaberg and KTM winning world championships with four-stroke machinery.

Recently, the sport has evolved with sub-disciplines such as stadium events known as Supercross and Arenacross held in indoor arenas. Freestyle (or FMX) events where riders are judged on their jumping and aerial acrobatic skills have gained popularity, as well as Supermoto (Motocross machines racing on both tarmac and off road). Vintage motocross events have also become popular with riders competing on bikes usually pre-dating the 1975 model year.