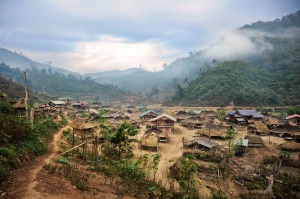 “You really need to visit the Indo-China region.” Rob made this casual remark getting up from his chair to leave my office. Indo-China was part of his administrative responsibilities, and it was my job to care for the financial needs of the whole Asia-Pacific area so we often had occasion to sit and talk business. It was the year 1995.

Rob was correct. I’d been content to leave that area in his capable hands, but having a close up look at development projects would help me visualize the need and make better informed decisions. “Let’s schedule a date,” I said. He sat down again and we checked off some mutually acceptable dates for a visit.

Eventually we had visas in hand and were on our way to Bangkok. There we linked up with Cliff who’d spent considerable time in the tribal north of Thailand where Lao language was spoken. He was at that time doing PhD study on a branch of Buddhist religion, was multilingual and would help us liaise with authorities while in Laos.

Laos traces its history to the kingdom of Lan Xang, founded in the fourteenth century, which lasted until the eighteenth century, when Siam invaded and assumed control of the separate principalities that remained. To avoid a costly war with the French, the Siamese king ceded lands now known as Laos to them, and these were incorporated into French Indochina in 1893. The French saw Laos as a useful buffer state between the two expanding empires of France and Britain. Under the French, the capital (Vieng Chan) was changed to Vientiane.

Following a brief Japanese occupation during World War II, the country declared its independence in 1945, but the French re-asserted their control and only in 1950 was Laos granted semi-autonomy as an “associated state” within the French Union. Moreover, the French remained in de facto control until 1954, when Laos gained full independence as a constitutional monarchy. Under a special exemption to the Geneva Convention, a French military training mission continued to support the Royal Laos Army. In 1955, the U.S. Department of Defense created a special Programs Evaluation Office to replace French support of the Royal Laos Army against the communist Pathet Lao as part of the U.S. containment policy.

Political unrest in neighboring Vietnam dragged Laos into the Second Indochina War a destabilizing factor that contributed to civil war and several coups d’état. The North Vietnamese Army invaded and occupied portions of eastern Laos. The North Vietnamese army, with its heavy weapons including heavy artillery and tanks was the real power behind the Pathet Lao insurgency. In 1968, the North Vietnamese Army launched a multi-division attack against the Royal Lao Army. The attack resulted in the army largely demobilizing and leaving the conflict to irregular forces raised by the United States and Thailand.

In 1975, the communist Pathet Lao, backed by the Soviet Union and the North Vietnamese Army (justified by the communist ideology of “proletarian internationalism”), overthrew the royalist government, forcing King Savang Vatthana to abdicate on December 2, 1975. He later died in captivity.

After taking control of the country, Pathet Lao’s government renamed the country as the “Lao People’s Democratic Republic” From Wikipedia, the free encyclopedia

Crossing the mighty Mekong River Friendship Bridge was less of a problem than I’d imagined. Customs and Immigration officers were friendly and helpful and we made our way to the Vieng Chan (Vientiane) airport for our forward journey north to Louang Namtha

While Louang Namtha was the administrative centre of the region it appeared to have been caught up in a time warp. On landing at the airport and having our documents again carefully scrutinized we searched for our baggage. Mine had not arrived, and it was only on the day of scheduled departure it arrived.

Our taxi from airport to authority approved accommodation was an eye popper, and certainly the most novel transportation I’ve used on business. Parked outside waiting for us was our taxi, a three wheel tractor normally used to plough paddy fields with trailer attached which had obviously just been cleared of its load of soil. We climbed into the trailer and stood for the bone shaking trip into town which seemed to last for hours over washboard dirt road to our hotel. As I tried desperately to remain upright and hold tight to my laptop computer foolishly brought with me I thought of the comfort of taxis I regularly took between Changi Airport and my office in Singapore. It was obvious this area needed all the development money we could muster.

While accommodation was rather basic, food supplied at the hotel was surprisingly good. I learned we were not far from the Chinese border, and had the experience of walking through field after field of cultivated poppies which obviously was the mainstay of that area’s economy. I was in the Lao part of the Golden Triangle which supplies much of the hard drugs finding their way to Western city streets. It is in the interest of Western governments to find alternate cash crops to support these farmers who have no intentional interest in destroying human life, but only wish to make enough money to survive. It is the drug barons who promote this scourge of modern society for their own profit and who exploit growers in their greed for profit.

We met the Communist authorities who had responsibility for governing Louang Namtha Province. They were happy for any development sponsored from abroad, but highly suspicious of the motivation behind any foreign gift or development. They politely thanked us for development activities in their area, and laid down in no uncertain terms their conditions for continuing development activities. Our local representatives in the area were closely monitored.

Prior to the takeover by Pathet Lao forces we’d stationed an expatriate in the area to supervise activities. Because of the remoteness of that area he had his own plane to fly in supplies, and it was just as well as he was able to make his escape during the firefight as Pathet Lao troops moved in to the fields surrounding his private airstrip. Those who’d been locally employed spent years in reeducation camps, but on our trip these former employees were permitted contact and were happy to remember more peaceful years.

On our second day Rob informed us we were scheduled to visit nearby villages where development projects were in progress. He asked tongue in cheek if I’d prefer to hike to the villages or take the “taxi.” I chose the hike! Surprising as it may seem it took the same time to walk an equal distance as it did to ride that taxi. There was no hint of suspicion from village elders and their people. They were not interested in politics only in survival, and they could see development projects in their villages were assisting them to live better lives. One of the great rewards of those employed in this line of work is to see positive change and to receive grateful acknowledgment from aid recipients.

In Louang Namtha at the time of our visit days were blistering hot and nights were cold. My clothes were getting to be a bit rank after a couple of days trudging around the countryside so I was anxious to at least get the sweat off my body and the only way this was possible was to attend bathrooms when water was available and the line for bathrooms short. The bathrooms were in a building block outside the hotel main building and in early morning inky blackness there was no light in any of the washing cubicles. So I approached the morning wash with great apprehension. Would I be sharing that dark cubicle with a snake? My need to feel clean at least for a brief time until I once again donned those sweat encrusted clothes for the day drove me into my potential snake pit every day until our departure. I regretted the loss of luggage which contained clean clothes and my own toilet gear.

But in spite of inconveniences I look back on the trip to Laos with fond memories. Later returning to the comforts of super advanced Singapore I had a new appreciation for the fact the majority of our human race don’t live as comfortably as I do, and we all have a responsibility to do what we can to improve the lot of each other. I was able to reflect on the fact generally ordinary people hold no ill will to those of a different race or nation. It is the “generals” who fight battles with each other and common people are drawn into that conflict unwittingly and unwillingly. Common people just wish to survive in peaceful circumstances and be left alone to enjoy life as best they can.