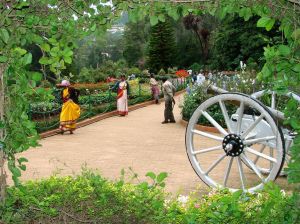 Felicity Rani stretched in her wicker chair and got to her feet. She headed for the kitchen to enquire about progress in food preparation. She was strict about timing and everyone knew it. Chief cook recited the menu for the evening with choices where necessary and indicated each pot where those menu items lay in readiness for the return of guests from their evening walks. Dinner would be served precisely at 8 pm.

Then Felicity Rani made an inspection of the rooms with the head of household staff in tow to see they were up to written standards set. She smoothed a pillow in this room, rearranged bed covers in others and inspected jasmine posies left on each pillow. The quality of this little hotel was known far and wide and bookings had to be made far ahead for prime tourist seasons.

Only after all that had been accomplished did she return to her favourite wicker lounge chair to relax and wait to greet returning guests eager for their evening meal. She saddened as she thought of how Tom would have loved this hotel and its routines. He was an organized person and personable enough to have enjoyed mingling with the interesting successful people who paid handsomely to enjoy hotel services on a regular basis.

It had been hard for her to make that journey south without any relatives or close friends to support her in her grief. On reaching her destination in the hills she had as first order of business journeyed to the headwater of one of the South India Rivers and there deposited ashes of her husband. She watched as the river absorbed those ashes and sent them on their way to be embraced by the plains of Bharat Mata and eventually the sea. Then having closed that chapter of her life she turned her attention to the ambition both of them had for their retirement. This was not retirement she mused it was a new chapter in her life.

Because of turnover of managers over the years the hotel needed considerable refurbishing. Tom’s railway settlement money was poured into carpenters, painters, kitchen and room upgrades. It was hard work and hotel guest appearances in those early years sparse. But Felicity Rani was able to carefully manage her way through those years and found herself on the bottom rung of renewed interest in hill vacations. Those who sampled her hotel told their friends and soon there was competition to find a place at her establishment on holiday seasons.

Along with those guests had come several tentative offers of marriage again. Initially Felicity Rani was surprised and upset. She was not yet ready to surrender her happy memories of Tom and their marriage. But over time she found these proposals amusing. She was approaching middle age for that era so the possibility of having her own children was unlikely. Then there was the probability many of those proposals were from hopefuls eyeing the prosperity of this little hotel and Felicity Rani’s rising affluence. She would need to be careful!

Over time though as she contemplated the years ahead she felt an emptiness which could not be satisfied by her pleasant daily routines or fleeting companionship with guests who she’d come to know over the years. She’d watched their children grow, and the parents age. But they’d each other in an undivided family relationship. The only family she had as she aged was the Gopal Das family and her tentative attempts to reconnect with them had been rebuffed several times. That was a lost cause.

But there was one who revived feelings she’d not experienced since the death of her husband. The family had attended her hotel over many years. She’d watched the children grow and complete their education. Then one summer the family arrived minus one. She discovered the wife had died and expressed her shock and sympathy. Those children had clung to her as one familiar during that visit and their father had been grateful to her in his own grief.

Over future seasons first one of the children then another were absent as they entered the world of business. She discovered their father was a Bangalore industrialist. He was grooming his boys to learn and eventually take over business.

Then one day Felicity Rani received a surprising invitation. The industrialist was giving his only daughter in marriage and invited Felicity Rani to be an honoured guest of the family for the marriage ceremony. The grown up children welcomed her with open arms as she arrived at the station in Bangalore. Nothing was too much bother for them to do to please her and she was overwhelmed by their attention. The industrialist watched the reaction of his children thoughtfully. Then after the wedding she was seen off at the station by the boys who chatted about happy times they’d spent on vacation in the hills. She felt that empty feeling beginning to dissipate as they spoke and was in high spirits on her return to the hills.

But the next summer vacation saw only the rich industrialist arrive. Felicity Rani was disappointed but apart from enquiring about the children’s health and current situation she left the man to enjoy his vacation undisturbed. But it seemed everywhere Felicity Rani happened to be around the hotel the industrialist also happened to be. This made her feel uneasy, but at the same time she felt a yearning in her heart which his presence seemed to fill.

Then one afternoon after finishing her rounds in the hotel she had the feeling someone was watching her. Looking around she saw the industrialist newspaper in hand but eyes fixed on her. Their eyes locked and she felt herself automatically moving toward his chair. He motioned her to sit. She did, but the adrenalin rush of that eye contact caused her heart to race. This alarmed her but she was unable to move away and sat fidgeting. She smiled and tried to look unconcerned asking about his children and business.

He motioned that there was something he wanted to say. But he sat with mouth moving trying to get his words organized.

Felicity Rani’s discomfort increased with every second of delay. She was about to excuse herself and go about her routines when the industrialist sensing this finally got his speech organized.

“You must be having something to do, but please excuse, I have something to say. My children are sending their best regards. I am also thanking you for your kindness to us over the years. So if you would be so kind I would like you to be my wife. Please excuse my poor English.”

The effort getting that speech out was almost too much for him and he recoiled expecting her to say no and go about her work. He looked wretched!

Felicity Rani shook her head in disbelief which caused the industrialist’s face to cloud over in hurt.

“So sorry!” He murmured and picked up his paper and attempted to leave.

“No!” Felicity Rani whispered as she placed her hand on his tenderly.

“I didn’t expect such a compliment from you. Please don’t be embarrassed and if you would be so kind please give me a few minutes to clear my head and think this over. I’ll go for a walk and think about your proposal and let you know very soon.”

Felicity Rani had a warm feeling as she made her way through the front door. Empty feelings she’d felt for many years were taken over by this warmth. That warmth seemed to whisper to her, “Say yes!” She knew this man and he didn’t need her money. He could buy her out several times over and yet he valued her so highly he wanted to marry her! She could not believe it!

And that’s what she was contemplating while watching the world go by in the street below with the shouting phool wallah receding into the distance and Father Joseph making a disappointed retreat into his church.

She re-entered the hotel and headed for the industrialist’s chair.

“I would be honoured to be your wife,” she said

The industrialist jumped to his feet and shouted happily. “May I call you Felicity Rani?”

“Perhaps I may have to change my name from Smith?” Felicity Rani replied laughing.

The above image is the property of boomsbeat.com