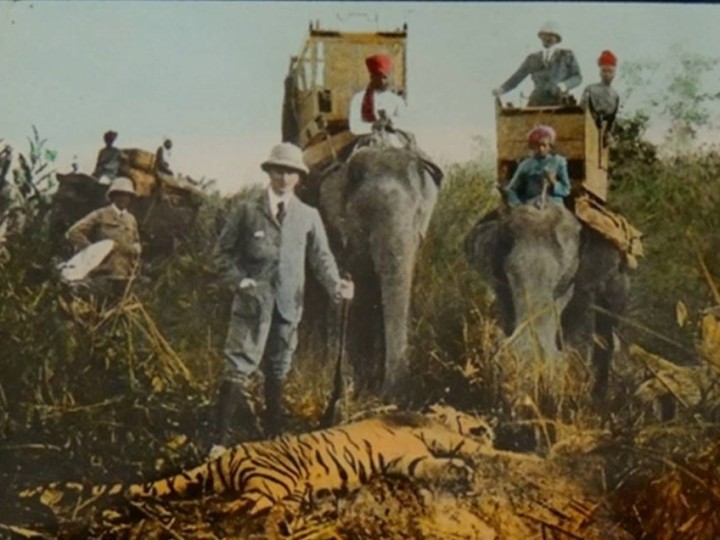 Mahaveer was nonplussed when negotiations would proceed directly with Bill Higgins rather than a go between and almost decided to back out on his commitment, but Manoj deftly steered his father through his concerns. To Mahaveer’s surprise no dowry was asked, Manoj had greedily convinced Bill that in an inter-racial situation that would not be necessary. Bill on the other hand was familiar with Indian betrothal customs and showered gifts on the family at the engagement to the surprise and happiness or Ranjana.

Shanti could do or say nothing against wishes of her father and brother and stoically prepared herself for the inevitable consummation in marriage. Bill opted for a traditional Indian marriage and happily asked to see his commanding officer requesting permission to marry and be assigned married quarters. The officer was initially happy and congratulated Bill as his skills were valued by the Cantonment and they wanted him settled in marriage, he inquired who the lucky English lady was. There were so many hanging around Pune from England looking for a suitable husband but he’d never seen Bill with any of them. But when he found it was the daughter of an Indian trader he exploded in anger. Such a marriage would not be recognized and Bill would certainly not be permitted to bring an Indian wife into the Cantonment area. He could bring her in as a servant in the servant’s quarters but not as a wife. The officer dismissed him in a rage.

Bill was surprised and upset. He’d arrange suitable accommodation outside the Cantonment area then. He was determined to have Shanti the love of his life even if that meant leaving the army. It was a big decision as his family had been army officers for several generations.

The wedding proceeded and was attended by a large section of the business community in Pune who were surprised and appreciative of Bill’s sensitivity to Indian cultural ways and easy command of languages. Some privately disapproved of the marriage but as Bill was an important conduit of business to the community they presented a friendly veneer through attendance.

To Shanti’s surprise she found in her marriage relationship understanding of her beliefs and ways and genuine love. She began to warm to this Sahib Bill who was now her husband. While Manoj had convinced Bill there would be no dowry required in an inter-racial marriage situation, Shanti had other ideas. She approached Mahaveer and suggested when the Indian community learned no dowry had been sent with the daughter it would be a great loss of face for the family. How would she answer when an inquiry would be made to protect her family reputation? Mahaveer capitulated and Shanti departed with her dowry. When Manoj heard of this he was furious. His hatred of his sister now knew no bounds. In that Shanti was now with a husband protector who he needed to keep on friendly terms he took it out on Ranjana. Ranjana being a descendant of the great Maharashtran patriot Shivaji and with the same warrior spirit responded in kind. In anger Mahaveer put them both on notice they should stop their nonsense or there would be another wife and other sons who’d have his favour. Both retreated, but Manoj now had his father and sister to be dealt with when the time was right.

When Bill Higgins commanding officer learned of the marriage he was furious and, after contacting Bill’s parents, summoned Bill for a dressing down. From the point of view of the army there was no marriage. The officer threatened him with demotion and a possible transfer from India to Australia. It was for his own good the officer said calming down stating Bill’s parents were appalled too.

However, privately he had no intention of following through with that threat. The Cantonment did not have people of Bill’s calibre with his knowledge of languages and customs to deal with Indians for necessary interaction. He thought to frighten the young man and bring him back into line would be the best course of action. If it was marriage the young man wanted he’d work with the Cantonment women to get that arranged. He dismissed the young soldier congratulating himself on saving a young man from ruin and talking sense into him.

Bill left the office in a daze. He didn’t know whether those threats were real or not. He was once again faced with a decision. Would it be the army or Shanti the love of his life. Without hesitation, the decision was made. He’d served his term of service and was entitled to a discharge from the army if he requested it. So, without hesitation he wrote out his request for discharge and left it with the officer’s personal assistant.

The PA ran from the office as his commanding officer raged within on reading the request for a discharge only to be called back immediately. “Send an arresting detail and have him in my office immediately!”

The arresting detail found Bill in the bazaar purchasing for the cantonment and marched him back to the Cantonment. Word spread like wildfire in the Indian community and within an hour the news was delivered to Mahaveer and Manoj. This was a great loss of face for the family as the Sahib was now considered one of them. Shanti went into overdrive when she heard servants whispering and demanded to know what they were talking about.

Mahaveer now regretted the marriage and summonsed Manoj. He accused him of getting the family into this mess. Manoj left his father even more determined to unseat him from their business and take it all for himself. He’d have both his father and Ranjina out on the street yet.

Mahaveer understood his sons mind and made quiet plans heading for in-laws on his departed wife Shaku’s side of the family where he proposed a merger of businesses and marriage to Shaku’s younger sister whose husband had died leaving her childless. When Ranjana heard of her husband’s plan she smiled grimly. They were family and would get along well. The combined families would have the resources to keep Manoj in his place even though he was Shaku’s son.

Shanti whose name in Indian language meant peace felt the spirit of Shivaji the great, her ancestor, rise in her bosom. There would be no peace! Sahib Bill was her husband, she’d take on the whole English army if he were not released to her. She cared nothing for this English army, only her husband. She sat seething and considering her options. She could not return to her father for assistance or Manoj who she understood hated her. But she knew she had a kindred spirit in her mother Ranjana, so she went to see her and seek advice. It was there she learned of the quick reaction of her father after news of Bill Higgins Sahib’s arrest. She too smiled as she thought of how this could impact on her half-brother Manoj.

Meanwhile back at the Cantonment Bill Higgins found himself staring through bars from his cell trying to figure out what had gone wrong. He was puzzled! He was strictly honest and had been careful not to accept bribes from businessmen to gain contracts from the army though they were constantly offered. His commanding officer had rifled through papers on the desk when he was marched into the room, ordered to salute and stand to attention. The commanding officer barked a command and the arrest detail left while the officer continued to stare at papers one by one.

Finally, he looked up. “You’ve been taking bribes to grant privileges to our suppliers. I have all the evidence here. It’s a very serious mark against you soldier. How can you expect an honourable discharge when these accusations are made against you?”

He barked again and the arresting detail reappeared. “Lock him up while I consider what to do with this soldier.”