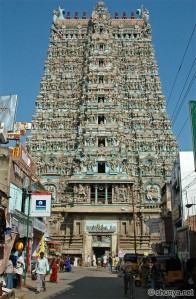 Only absolute necessity would drive us from our holiday retreat almost seven thousand feet high on Kodaikanal Mountain, overlooking blistering hot coastal plains of South India. In order to reach our holiday haven we had to endure two days travel, barely pausing in our journey to purchase food or fuel. The only breeze enjoyed on that trip was created by our cars in motion, so we pressed on relentlessly toward our destination. A month vacation in cooler climes strengthened us for the ensuing year, and as homeward journey after our vacation followed the advance of the annual monsoon it was more pleasant returning than our forward progress had been.

One of the cars in our convoy had been damaged by rigors of the journey, and parts were available only at the regional city several hours travel into coastal plains below our holiday home. Soon after arrival and with considerable regret we descended our mountain entered the heat zone and headed toward the provincial capital Madurai.

We were halfway into our journey and feeling miserable in the stifling heat of the plains when an unusual event occurred. Our lethargic responses were jolted into full attention as unusual characters standing next to a shabby car by the roadside attempted to flag us down on the lonely stretch of road. We sped on past them, but looking back we could see them rushing to their car to give chase. We’d heard about similar encounters on lonely roads, and the consensus was it would be dangerous to stop and find out what they wanted. Others before us had done so at their peril.

The car following us may have looked rather beat up and incapable of speed, but to our surprise it wasn’t. We were soon overtaken, and as the car drew opposite we saw guns pointed at us through the window. The car’s occupants were obviously very angry, and waved us to pull over to the side of the road. They say discretion is the better part of valor, and this was the time to be discreet. We pulled over.

When the local language didn’t seem to get through to us the leader switched to English.

“Why you didn’t stop?” The question was emphasized by a gun waving in our direction.

Our driver responded we’d been told by Police in Bombay (now Mumbai) never to stop on a lonely road if someone flagged us down, as we’d likely be robbed if we did.

This further infuriated the leader of the troop now nosing suspiciously around our car.

“We are Land Customs!” The leader almost spat the words out in his anger. “You will be standing here while your car is searched.”

What on earth are Land Customs! That sounded like an unusual statement. Shipping Customs and Airport Customs we’d experienced, but Land Customs? Our driver meekly asked if they had identification, and one of the group produced an official looking medallion from his underclothing. Yep! There was such a thing as Land Customs, and we were about to find out how they operated. We were relieved to find out this was not robbery, but now had to explain why we’d fled from the law. Were we going to be in serious trouble?

The gun was handed to an assistant who kept a close watch on us while his companions systematically stripped seats and belongings out of the car and placed them on the side of the road for minute inspection.

Eventually anger cooled, and the leader returned to check our documents carefully. We were lectured on possible outcomes when running away from the law, and he explained they were working undercover and looking for hooch and contraband being smuggled overland from remote beach sites.

We were smarting under the humiliation of being body searched by the roadside to the disapproving glances of motorists scurrying past to avoid the same predicament themselves. No doubt they were glad we were the target for the day.

Our difficulty resulted from our inability to discern these unusually dressed officers of the law from dacoits. They’d no uniform, and the car was unmarked and not at all official looking. Appearance was certainly deceiving.

But why had they picked on us? We had that self righteous feeling all foreigners would project a clean and law abiding image and be naturally waved on with a smile of appreciation.

After the Land Customs officers had departed we took a long hard look at ourselves in the mirror. Dirty and unshaven after seventeen hundred kilometers of travel plus this hastily arranged journey we had to concede we didn’t physically match the image we had of ourselves.

Then it hit me! We looked a lot like those abandoned foreign hippy creatures who frequented hill country around India wasting their lives under the illusion of seeking spiritual highs, when all they accomplished was continuing drug induced stupor. Indians detested them! Maybe we couldn’t blame the Land Customs after all for pulling us over and searching us. Not all foreigners were representative of good culture.

So it’s all about appearances! I could hardly wait to get back to our holiday retreat and clean up so those I came in contact with would see something appealing in the culture I claimed to represent.

Notes:
Hooch or arak, a very potent village alcohol that has been known to kill those who drink it.
Dacoits, armed robbers.