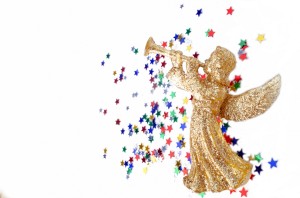 Mutual Understanding
Annabel busied herself fossicking in the cardboard boxes her husband Shawn moved progressively from the garage protesting as he came. As she tried string after string of decorations returning them systematically as each was rejected, she smiled at his protests. Christmas was coming, and the tree was being assembled according to her taste.
After marriage Shawn and Annabel approached their first Christmas tree dressing with enthusiasm. Shawn always remembered the trauma of that first Christmas tree dressing learning experience. Moving furniture, an appropriate site had been selected in the large visitor receiving room which gave what Shawn imagined would be a good viewing both within the room and through plate glass wall for those passing by when curtains were opened. Annabel had been enthusiastic, and they’d decided to take a meal break before finalizing dressing the tree. However, after the meal Annabel had sat gazing at the tree stroking his back while Shawn’s eyelids drooped with the pleasure of her touch. Then she’d wacked him on the back bringing him back from twilight zone.
“I don’t like it Shawn, I think we should move the furniture and bring the tree over here where we’re sitting!”
Shawn had protested. It had already involved considerable effort on his part to locate and transport the tree, move the furniture where it was, and see the tree was stabilized and near electric supply outlets. Then there was the question of all that stuff already placed on the tree. How would that survive a relocation? What about untidy cables from now distant outlets?
The disappointment on Annabel’s face made a plain statement he could forget those back rubs for a while. So, he shrugged and moved everything around until she was satisfied.
He looked at her hopefully, “Can we go to bed now darling, you can finish it off tomorrow?”
Annabel cocked her head on one side and surveyed the scene, then opened the front door and went outside on the lawn to come to a final resolution. She stepped back inside shaking her head.
“You were right Shawn. You can’t see it well from the outside now and I don’t like that cord running around the back of the lounge to the tree. It’s an eyesore isn’t it? We have to move it back?” She patted him affectionately and sat down to survey expecting her husband would respond to the command.
Shawn exploded, then checked his words as he saw the horror on her face. He’d never shown anger to her during the two years of their engagement while they worked hard and saved for this home even though his job was stressful. He moved slowly and took her in his arms as she shed a tear.
“You’ve never been cross with me before Shawn!” She gave a sniffle to illustrate her hurt feelings.
“I’m sorry, you’re right it doesn’t look good and I’ll rearrange again so it looks better. Don’t cry, I guess I’m a little tired but that’s no excuse.”
Little did Shawn realize at the time there would be a long future of apologies to be said through the rest of married life. The training of a husband requires a lifetime of patient work for a wife to engage in.
But that was then, and this was now. They had two girls now who were taking an active interest in what their mother was doing and learning their future role as Shawn waited around for instructions. It had only taken two years for both to decide the husband would place the tree and bring in the boxes to then be released. With that arrangement the husband was satisfied, grumbling to draw attention to his hard work of preparation and the wife satisfied with her role ignoring the theatrics while placing and rejecting items on the tree over a few days until moderately satisfied with the outcome leading to a satisfactorily dressed tree.
Shawn was an accountant, and accountants needed to see things in their place quickly and methodically involving not only how they should be placed in boxes clearly marked but how and where the boxes were placed for easy access up there in high storage.
At the back of the garage was his hobby tool room and it was a thing of wonder with items arranged neatly on walls clearly marked. Now and then Annabel would decide to do home repairs when Shawn was not available to care for home maintenance and not being much concerned about proper place in her man’s inner sanctum the tools were left around for him to locate and place when he visited his inner sanctum next. This misplacement was desecration of the highest order! He would not say anything to Annabel about it as he loved her dearly, but a woman can read a man like a book and she’d retreat into the kitchen to busy herself until he worked his frustrations out on the golf course. A good win there and Annabel’s intrusion into the inner sanctum would be forgotten.
Shawn knew that the opposite was true in the case of Annabel’s hobby room at the back of the house. That was off limits to all but Annabel’s most trusted girlfriends, even in an emergency.
But despite personality differences Shawn and Annabel’s love for each other shone like a beacon for people to see and they laughed at each other’s oddities. Their children observed this affection and it made them feel secure.
To be continued.

12 thoughts on “The Christmas Spirit – Chapter 1”