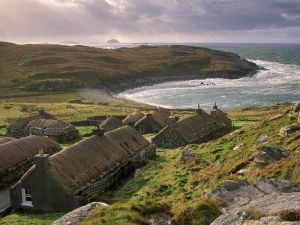 Colleen paused to look out her window toward the sea. She never got tired of that scene as she swished water around pots and pans in the kitchen sink. Gulls floated lazily in the air against a background of pure white clouds. She paused from scrubbing to consider how it could be that these white birds appeared so plainly in focus against such a backdrop, perhaps it was some other species. It didn’t matter, she just liked the thought of them up there floating effortlessly on updrafts from the cliff that fell away from a distant fence at the bottom of this property.

She strained to try and bring the few animals on that property into focus. Fences needed mending again and she lacked the strength to do it, so she had to be constantly alert when they were out grazing. Her next job would be to milk the goats churning some of the milk into butter and storing the rest in an underground chill room.

She was alone now. Originally arrived with her Robby after running away from home. Their parents had been against marriage and were probably still fighting over their eloping. Well they considered it to be eloping. There was no man of the cloth around this area to make it formal, but they’d considered it to be a marriage anyway.

Colleen could still remember arriving in this place. Robbie and she had been to school together for as far back as she could remember. It was a one teacher school with ancient wood slab desks to be shared by two. Robbie was always getting into mischief playing tricks on teacher and the twenty other students in their little school. The teacher, Jane McDonald was young enough to enjoy his pranks and students loved her. During crop harvesting everyone in the village was engaged so the school closed while it was in progress as even children were expected to contribute to family survival. The island had an unfavourable climate, so crop season was short, and the village fretted hoping each year would produce enough for the long cold season ahead.

The island kids were still in their late childhood when families expected them to be out of school and fully engaged in caring for work around each land holding. Boundaries between properties were constructed of rock walls for rocks were in abundance, or in some areas, hedges.

As the youngest were assigned to caring for flocks Colleen and Robby continued to meet among the hedge rows separating their property for brief periods of play. They developed an attachment from this early age which started to develop into something deeper as they reached their teens. At first the tentative touching was in all innocence, but with each year of maturing Colleen sensed a need to make their relationship permanent. She wanted to be held by Robby and slow as he was in catching on, he eventually felt stirrings he couldn’t explain either and touch led to embrace.

And it was in one of their embraces among the hedges Colleen’s younger brother Michael found them one day. He’d moved in so silently they hadn’t heard him. Not understanding what budding romance was all about he concluded his sister was being attacked and ran the half kilometre to the old farm house where he breathlessly informed his startled mother Colleen was being attacked by the boy next door. Siblings ran to call their father mending fences in fields and the family rushed to the scene with father brandishing his old gun. Father and Mother took in the scene and assumed the worst.

Robbie was beaten and sent running home with gun blasts fired into the air to encourage him on his way. Mother slapped Colleen’s face and led her home pulling her along by the ear. The parents sat her down and fired a barrage of questions and not waiting for a response beat her until she could cry no more. She’d little knowledge of the facts of life her parents were quizzing her on and was totally exhausted from trying to understand what had created this disturbance. She could not think of anything she’d done wrong to deserve a beating and indeed nothing improper had happened. So, when it began to be clear what her parents were thinking a slow burning resentment started building in her bosom.

Just when the parent’s frenzy was beginning to wane there was a commotion at the front door and everyone ran to see what was happening. There at the door stood a very angry Angus and his wife with their son Robby. The neighbours had been friendly in the past each helping with the other’s harvest yearly, but that friendship was now under test. Angus pointed to his son whose face showed signs of a bleeding nose and rapidly revealing bruises. He asked what the wounds were all about.

Michael senior rose to his full height and with the passion of an angry father stated he’d found Robbie molesting his daughter and so the wounds were appropriate. Angus was having difficulty with this explanation and his fists clenched and unclenched in anger. He believed his son and Robbie had told him of his fondness for Colleen and in close questioning swore he was telling truth that nothing had happened between them. Colleen was pulled out again by the ear and quizzed in front of the neighbours. Her explanation agreed with Robbie’s report.

Michael Senior looked at his wife and she looked at the ground. She began to realize they’d over reacted and should have questioned before punishing. But family pride was at stake. Colleen was pushed inside the house again and Michael Senior faced Angus. The two are lying, my young son saw Robbie molesting ma girl, he called for Michael Junior for support, but the boy had run for the hedges and was out of hearing. It had been the intention to protect the sister he loved but to see her punished this way and know he was the cause of it was too much for him to bear. He was out of hearing and crying bitterly.

Angus snapped. With a series of punches he had Colleen’s father on the ground and stood over him glowering.

“Ye not be touchin ma Robbie ever again Michael. We not be friends anymore.”

The rift between those two families became the talk of the village and every move was watched in expectation some day they’d meet in their village and provide entertainment for them. There was little enough entertainment there and any unusual event like this was welcome.

Colleen was locked in the home for three months just to confirm there’d not been any more to the story than what the two of them had told. Then when it became apparent all was well, she was released to care for farm chores once again. But this time it was with the express warning not to ever meet Robbie again.

Michael Junior had apologized to his sister with tears over and over only to be rebuffed. It was hard to forget the severe unfair punishment she’d endured but eventually she realized he’d only thought of protecting her and relented. He was her shadow after that. Father still did not trust Colleen and it was the job of Michael Junior to be with her constantly in the fields. For that purpose, he was taken out of school for a year until his father could find a suitable match for his daughter. No chance of anyone in the village being a match for her now the story had been spread far and wide. He’d have to work with people he trusted to search in faraway villages. This became commonly known in the village and was the latest spice in a continuing story of interest.

Through that grapevine Robbie came to know of the plan to find a suitable husband for Colleen. He watched movements on the neighbour farm until one day Colleen and Michael Junior happened by the hedge he watched from. He whistled a bird call he’d used since childhood to catch her attention at school. Colleen heard and understood, she turned to her brother.

“Mikey what would you do if Robbie happened to meet us here, would you run and tell Dar?”

Mikey shook his head. “No sister, I’ll never tell on you again. I thought he was hurting you and that’s why I ran for help!” He began to tear up.

She put her hand on his shoulder reassuringly. “I know that Mikey, now I think Robbie is on the other side of the hedge and I want to talk with him. Will you let me, or will you run to Dar? If you’ll let me do that you’ll be my best brother forever!”

Mikey nodded his head in agreement uncertainly and Colleen smiled at him. “Thank you Mikey!” She turned and slipped through the hedge and Robbie folded her in his arms. They swayed for a few minutes enjoying their closeness. Then Robbie spoke.

“Your Dar is asking around for a suitable man to marry you Colleen. I want to be that man. Our parents are so mad at each other still that both will never agree to a wedding between the families. If you are brave, I want to go with you to the other side of the island. I’ve been there by boat but it’s a long way through the mountains and it may take us a few days to get there. I don’t know where we could live or if there is any work there? You may be without food for some time. What do you think?”

“Shall I come now?” Colleen looked at him hopefully.

The above image is copyrighted to ascotintenvessee.blogspot.com