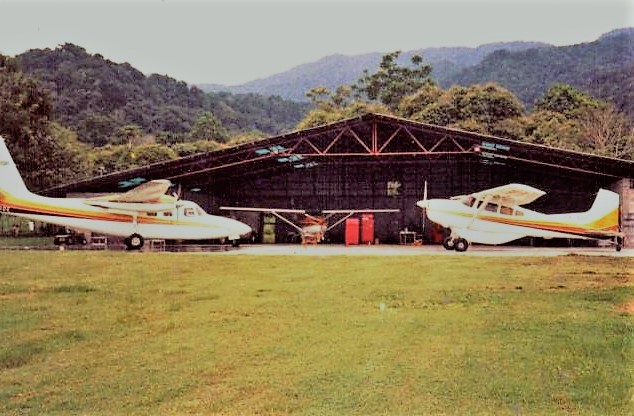 “On this trip we check out a jungle strip not used for some time to see if we can revive it!”

Leon was a bush pilot who’d flown in and out of jungle strips since getting his clearance to fly. I’d just completed an assessment of the air service we’d been funding from Singapore having spent several days orienting to this air service and its support facilities.

Still a clear memory was the welcome when I’d flown in by commercial airliner and been driven out to the small settlement supporting the service. Alighting from the car and heading for the guestroom with my luggage I’d turned around the corner of a workshop and suddenly been confronted by men in grass skirts and tattoos branding spears and screaming a blood curdling challenge. Apparently, that was standard welcome for unsuspecting first visitors and it gave the locals hours of mirth afterward if they could detect the evidence of fear on face or other parts of the anatomy. Having endured many scares in my work overseas I’d practiced a non-committal response to everything. So, while locals were disappointed my insides were still reacting to the horror of that greeting.

It had been interesting of an evening to meet with the team running that base. There were several experienced bush pilots, a tribe of mechanics and a support team, and as their special guest on this occasion, the inspector who’d been flown in from the US to give them their annual tests for continuing international accreditation.

I was aware that while experienced mechanics did their daily service before and after flights, there were times when an airplane engine needed to be removed and flown to Singapore for required periodic check, and in some cases a rebuild before being flown back and installed for the proscribed new period of service. It was comforting to know as I went up in those planes to look at various locations serviced mechanics were keeping meticulous records and doing their work well.

But despite careful attention to detail, flying in that part of the world was a high-risk event. Up among those jagged peaks were settlements to be serviced with weather unpredictable despite access to continuous monitoring of mother nature. Visibility could be clear as one approached a pass between lofty mountains with access narrowing for some flight distance until at last a plateau emerged. Seemingly out of nowhere clouds would fill the pass with zero visibility for the forward journey and no idea through eye contact how far from the wings these sides of jagged peaks were.

For an unsuspecting new passenger, it would be a terrifying experience, but pilots calmly plodded on checking their instruments each second until the plane emerged into sunlight. There were notable wreckages on sides of mountains to show perils of not watching instruments. Even some pilots of this air service had died through sudden freak weather conditions.

There was another jungle service operating a few miles from this airstrip, and the government airport a little beyond that on the coast. All aircraft needed clearance from the government facility before take-off and landing even though they were in contact with their own base when flying.

It was decided I should check out an extended service beyond Irian Jaya and make a jump across water to the giant island of Kalimantan where an extension of the service operated. This Island was shared by Indonesia, Malaysia and the independent kingdom of Sabah. Much later I was to make a similar trip from Irian Jaya to Sabah by small aircraft, but that is another story never to be forgotten.

The twin engine aero commander was chosen for this trip and I packed my things and waited for clearance to commence the journey. Eventually we received clearance and started for Pontianak on the South of the Island of Kalimantan still known to the world as Borneo. But there would be stopovers as we island hopped and the luxury of staying in old colonial buildings that had survived the days of Dutch occupation. It was an exciting experience, sometimes communicating with airfields ahead through aircraft flying thousands of feet above us because of poor signals closer to earth in the tropics. Tropical splendour of islands and sea craft on blue waters below is a sight never to be forgotten.

On arrival in Pontianak we waited in shimmering tropical heat for the considerable time it takes to clear paperwork and be released to find accommodation. Leon the pilot got us settled then returned to the airport where the mechanic who accompanied us was working with officials to refuel the plane. The mechanic was from this area and left us to find his relatives and stay with them overnight.

Next day we were to inspect an airstrip that had been serviced in the past, but had fallen into disrepair due to the discontinuation of service to that area for a time. We’d been informed the villagers had taken back the strip and were using it for grazing and recreation so didn’t really know if it was a safe place to land any more. We were going in to renegotiate with village elders and recommence a service.

Next day as refreshed as possible after sleeping in stifling heat under lazy fans we headed back to the airport and waited while pilot and mechanic had a lengthy animated discussion with airport officials. Apparently, there was an issue proceeding to a strip which had been removed from official recognition as a landing area. However, this was eventually sorted out and permission granted.

From the air Kalimantan looked like an unending blanket of green foliage, occasionally ripped by illegal loggers leaving their mark in the jungle. Eventually in the distance we saw a break in this blanket and Leon informed this was a giant canyon area tricky to negotiate as we’d have to fly low and land on the strip commencing at the lip on the opposite side of the canyon. Updrafts from the canyon could be expected to buffet the plane throwing it around as it made a final approach.

Leon gave a grunt of disapproval. The strip from the air looked even enough, but grazing there were herds of villager’s flocks and children playing games. At that moment the predicted updraft hit throwing the plane mercilessly about. Leon pulled back and the engines screamed as the plane climbed. The pilot and mechanic shrugged, it was all in a day’s activities. The plane circled, and Leon lined up the strip again. Down below villagers had sensed the intent of the plane and were driving children and animals off rapidly, then flocked to the side of the strip to watch the plane approach.

Once again, the plane shook violently while Leon struggled calmly with controls. We came in slightly sideways and the nose turned to line up the strip as wheels hit the ground. The strip had not been maintained and the plane leaped from protrusions and holes as all stops were pulled out to bring the plane safely to a standstill. At the end of the strip the plane did a laborious turn around and faced back in the direction we’d made the approach. Props came to a slow standstill and village elders emerged from the distance and waited for the pilot to step down with the mechanic.

There was an angry exchange as village elders made known their frustration at unannounced invasion of their village privacy. As the conversation was in a local dialect the mechanic took over negotiations and eventually anger subsided and conversation switched to Bahasa Indonesia rather than the local dialect.

We were invited to an official welcome at the village. Snippets of conversation were translated into English for my benefit and it was obvious anger had turned to welcome hospitality. While the mechanic negotiated a reopening of the strip, an agreement requiring villagers maintain the strip and repair it for safer landings in future, Leon conversing with elders in Bahasa  walked me around the village accompanied by dozens of children staring at the wonders of a white foreigner in their midst.

The village was neatly kept. There were not roads to keep this village in contact with the outside world, but winding through jungle under canopy was a pathway used for generations and some in the village had motorcycles sturdy enough to load the family for an occasional trip to a larger village in the far distance for shopping. The government maintained a school and teacher to offer basic education to those valuing it. Technically it was required village children receive their education in Bahasa. The village was isolated, but self-sufficient and peopled by a satisfied happy people.

Negotiations having been completed successfully, and hospitality accepted, we were back at the plane and gunning engines. The pilot had inspected the length of the strip for dangers while we ate and for the first time looked apprehensive but determined.

With a lurch the plane leaped forward and bounced over ruts as it gained speed. Soon we were barely touching earth as we reached the edge of the strip and contemplated the yawning chasm below. Then flying over the edge an updraft swept us aloft as engines roared to return to a more sedate purr as we gained altitude.

Leon turned to the mechanic. “They need to do a lot of work on that strip, how will we find out when the work is done? Lighter planes will have a hard time with that landing!”

The mechanic grunted and spoke in Bahasa. “They have radio communication, we will find out that way!”

That event was the final educational experience for the trip. Next day I’d be back in Singapore consulting notes to write my report. My pilot friends were frontier air pioneers performing a service to villagers living in undeveloped areas of the world and they needed our encouragement and continuing resource support.